♦Note: This post is likely to be updated with key points from the meeting in the near future.

For more detailed information on the Fukushima Thyroid Examination itself, see the September 2017 fact sheet (long version, or e-published PDF) 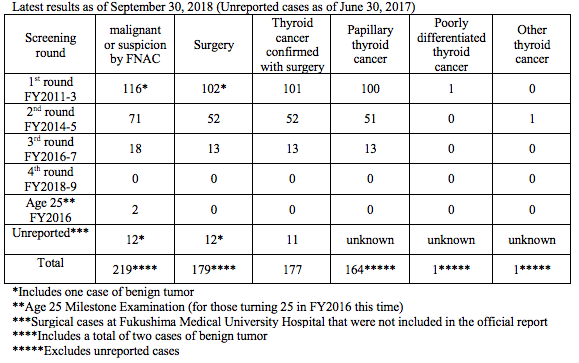 On December 27, 2018, the 33rd Oversight Committee for Fukushima Health Management Survey (FHMS) convened in Fukushima City, Fukushima Prefecture. Among other information, the Oversight Committee released the latest results (as of September 30, 2018) of Thyroid Ultrasound Examination (TUE) including the third and fourth rounds as well as the Age 25 Milestone Screening for those born in FY1992. Official English translation will be available here in the near future.

A five-page summary of the first through third rounds, “The Status of the Thyroid Ultrasound Examination,” was also released, listing key findings from the primary and confirmatory examinations as well as the surgical information. In particular, any update to the number of surgical cases is reflected in this summary before such information is compiled in the fiscal year update as of March 31. This summary is not translated into English officially, but here’s an unofficial translation.
[…]