When he’s good and ready, Haruki Murakami speaks his mind. 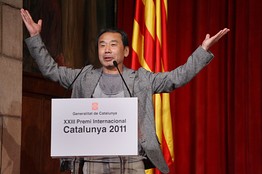 Japanese writer Haruki Murakami speaks at a ceremony where he was awarded the XXIII Premi Internacional Catalunya prize in Barcelona.

While many other figures in Japan’s arts firmament have already offered their opinions in the three months since disasters befell the country March 11, frequently criticizing the country’s reliance on nuclear power, its best-known living author kept his counsel. Until now.

Accepting an international award given to people whose work helps ”develop cultural, scientific and human values worldwide” from Catalan authorities in Barcelona late Thursday, Mr. Murakami didn’t mince his words. Picking up the International Catalunya Prize (in Catalan), the author described the crisis at Fukushima Daiichi as the second nuclear blow Japan has suffered after the atomic bombings of World War II—and a self-inflicted blow at that, he said, one that should never have happened.

“The accident at the Fukushima Daiichi nuclear power plant is the second major nuclear detriment that the Japanese people have experienced,” Mr. Murakami said, according to Kyodo News reports. “However, this time it was not a bomb being dropped upon us, but a mistake committed by our very own hands.”