The Wellcome Collection in London explores connections between medicine, life and art through both physical and digital exhibitions. Mindcraft is a new Digital Story that explores a century of madness, murder and mental healing, from the arrival in Paris of Franz Anton Mesmer with his theories of ‘animal magnetism’ to the therapeutic power of hypnotism used by Freud.  Through an immersive scrolling interface including image galleries, video, and interactives, the Wellcome Collection asks who really is in control of their own mind, and where does the mind’s power to harm or heal end?

A collaborative website—The Story of the Beautiful: Freer, Whistler, and Their Points of Contact—between the Smithsonian’s Freer Gallery of Art and Wayne State University presents a virtual tour of James McNeil Whistler (1834–1903)’s Peacock Room. Users are given the option to visit the room as it existed in London in 1876 or as it appeared after Charles Lang Freer moved the room to Detroit and reassembled it there in 1908. In addition to panning through the 3D interior space of the room, users can click on individual objects for more information as well as supplementary content including maps, timelines, and archival material from the Charles Lang Freer Papers. The team behind the website describes their project:

The site thus functions both as a digital archive and as an immersive virtual environment in which users can explore the room, learn about the objects it has contained, and see how the places and faces associated with the room contributed to its history. Anchored by the two virtual tours, the site offers users a deeply contextualized way to navigate the collections: some 400 digital objects, among them the room itself, the objects it has contained, as well as archival materials such as photographs, bills of sale, and correspondence.

In addition to exploring the Peacock Room virtually, users can browse the obects in the collection and digitized content from the archives separately. For more information, visit the website.

MoMA recently opened a new exhibition, Inventing Abstraction, 1910–1925, and this ground-breaking survey is accompanied by an equally ground-breaking website. The exhibition takes a multidisciplinary look at the development of abstraction and as such:

The exhibition brings together many of the most influential works in abstraction’s early history and covers a wide range of artistic production, including paintings, drawings, books, sculptures, films, photographs, sound poems, atonal music, and non-narrative dance, to draw a cross-media portrait of these watershed years.

In the October, ARTnews reported that the Leah Dickerman, curator of the exhibition, was collaborating with Paul Ingram of Columbia University’s business school because he specializes in social network analysis. Dickerman wanted to visually display connections and friendships among the artists and creators involved in the genesis of abstraction, and she and her team, along with their business school partners, began mapping connections in an Excel spreadsheet. The project then turned into a dynamic network of artists and other creative types connected by vectors. They liken the project to a Facebook or LinkedIn network for the abstract vanguard.

In the ARTnews article, Paul Ingram “explains that the quality of ‘between-ness’ in the network—being on multiple paths between others—is associated with creativity. According to this measure, he says, Kandinsky is the most central figure in MoMA’s history of abstraction.” The interactive chart highlights key players in red, and for each artist represented on the chart, more information about their role, interests, and works is provided.

And as an aside, the ARTnews article mentions several other charts or family trees that had been created to document relationships (either sincerely or snarkily) in modern art movements—be sure to check out the very famous Barr’s Chart! These genealogical charts differ greatly from the social vectors described in the new MoMA chart, but provided the initial inspiration for the website’s diagram. Another “genealogical” example comes from the Irving Penn Archives, housed at the Art Institute of Chicago: Penn drew an a family tree, titled “An Immodest Claim to Artistic Roots,” in which he lists several of the artists included in MoMA’s Inventing Abstraction exhibition including Fernand Léger, El Lissitzky, and Man Ray. You can view his tree here.

The VRC will be adding images from the exhibition to our LUNA collection soon!

To accompany the new show from the Smithsonian’s Traveling Exhibition Service, “Romare Bearden: A Black Odyssey,” an interactive iPad app has been created to allow users to remix Bearden’s Odyssey collages. The app also allows users to incorporate music in their collage. From the app description:

In 1977, Romare Bearden created a series of collages inspired by the ancient poet Homer and his epic story “The Odyssey.” Bearden believed that “all of us from the time we begin to think are on an odyssey.” The Romare Bearden collage app, developed by the Smithsonian Institution Traveling Exhibition Service in conjunction with the national traveling exhibition “Romare Bearden: A Black Odyssey,” was created with Bearden’s quote in mind.

With this lively, colorful, and highly engaging app, you can remix works from Bearden’s original series to create your own unique works of art, and express your personal journey. Choose from a variety of Bearden’s backdrops and layer in shapes and forms from other collages. Or cut your own shapes, add personal photos, change the colors of various elements and resize them. You can also add your words and your descriptions.

Music played a big role in Bearden’s life and his art, so the app also incorporates sound. While you build your collages, you can mash up audio such as ocean waves, jazz riffs, warriors fighting, or even your own voice. An option to record the user’s voice is also included and can be played back in a loop as the artwork is being created.

Save your visual collages and post them to a public gallery–where they can be tagged and revisited by other users–and share with friends on Facebook, Twitter, or email. You can also learn more about the traveling exhibition, Bearden’s life, and the companion exhibition audio tour app.

The app was created by GuideOne for the Smithsonian Institute. For more information, visit the iTunes App Store or stop by the VRC to play!

Today, the Rijksmuseum in Amsterdamn is launching RijksStudio, a digital collection of 125,000 works in the collection. We posted about the first installment about a year ago, and now they’ve fully unveiled their impressive new image platform.

All works in the RijksStudio are available for users to download for personal use as a high-quality jpeg image file. (Using images for professional and commercial uses is possible, but requires filling out a form to obtain permission from the museum). Depending on the type of use, print, and format, images can be downloaded either free or charge or for a fee.

In addition to browsing and searching the collection, you can create image groups or explore the image groups of other users. In depth content such as context about art movements, artists’ biographies, and other historical events is available when browsing through facets or when viewing an individual work. Images can be shared on various public media platforms including Facebook, Twitter, and Pintrest. You can also easily order reproductions of the images.

The image records for objects in the collection contain an absolute wealth of information, including basic object data, exhibition histories, provenance, related artworks, copyright status, and a section called “Documentation,” which serves as a bibliography of the object with links to published references of the work including scholarly articles, monographs, and exhibition catalogs. When online content is available, the object data includes links—for example, links to JSTOR articles.

The New York Times wrote yesterday of a new start-up called Art.sy, which is digitizing works of fine art to catalog in its database, called the “Art Genome Project”. Their service is similar to Pandora, which mapped a “music genome” in order to encourage user discovery of new songs, or Netflix, which uses algorithms to predict and suggest films and movies a user might like.

Art.sy already has 20,000 images in their database, is partnering with galleries, museums, and other cultural institutions to increase their catalog. In addition to traditional subject, genre, and period/movement based descriptions, Art.sy’s team is also tagging works with categories that their system will use “to make connections that are seemingly from different worlds.” These categories include ideas such as “focus on the social margins,” or “personal histories,” and “private spaces.” The system will also search for images that are most similar in terms of composition and color, providing yet another way to access different images.

For more information, see Art.sy’s blog or visit the Art.sy website, where you can request a login or browse the beta site. 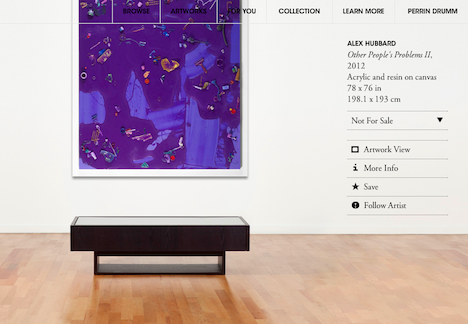 Art.sy is a new way to discover art you’ll love, featuring work from leading galleries, museums and private collections around the world.

Art.sy is powered by The Art Genome Project, an ongoing study of the characteristics that distinguish and connect works of art. Art.sy evaluates artworks across 800+ characteristics (we call them genes)—such as art-historical movements, subject matter, and formal qualities—to create a powerful search experience that reflects the multifaceted aspects of works of art.

One interesting option is to view works of art in a room, as shown above. This gives a vivid sense of size and scale. Art.sy is still in beta testing, and available only after requesting invitation.

Artfinder has partnered with over 400 museums worldwide to provide online access to hundreds of thousands of artworks. After creating a free account, Artfinder users can start building profiles in order to receive personalized recommendations. Users can “collect” favorite works and then share their virtual collections on Facebook or Twitter.

…A new game acts as a virtual workshop that allows children to explore geometric elements and ornaments in the homes of Sale and Marrakech, in Morocco. After finishing, children can print out their results as postcards.

The Brooklyn Museum’s project Split Second aims to explore how an audience’s initial reaction to a work of art is affected by various factors. It begins with an online, interactive experiment and will culminate in a small installation of Indian paintings from the permanent collection.

Split Second begins with a three-part activity that explores the Museum’s collection of Indian paintings… The first stage explores split-second reactions… Next, participants will be asked to write in their own words about a painting before rating its appeal on a scale. In the third phase, participants will be asked to rate a work of art after being given unlimited time to view it alongside a typical interpretive text. Each part of the exercise aims to examine how a different type of information—or a lack thereof—might affect a person’s reaction to a work of art.

The installation will open on the museum’s second floor on July 13, 2011. To participate, visit the Split Second website.