StoryMapJS is a free tool created by Northwestern University’s Knightlab, which aimes to make technology that promotes quality storytelling on the Internet. Storymap allows you to highlight locations of a series of events, like this example of Christo and Jeanne-Claude’s Works of Art. It also uses features like Gigapixel to tag points on an existing images like this example of The Garden of Earthly Delights or SnapMap to instantly create a map through your Instagram feed.  Try this open source user friendly tool for plotting your next project!

Just in time for this great weather, Curbed Chicago and the Chicago Public Art Group have created a Google Map identifying great examples of public art underneath Chicago’s overpasses. The map includes several murals that are in Hyde Park, so happy exploring!

For more information about public art resources, see our post about the Public Art Archive.

The online art journal Nineteenth Century Art Worldwide recently featured a new digital humanities research project that focuses on London’s art market from 1850–1914. The researchers aim to document the rise and spread of commercial galleries across the city by aggregating data from a variety of sources including galleries, exhibition societies, artists’ addresses, and retail spaces. The data was then added to a map of Victorian London—users can turn data on or off depending on their research, including moving chronologically through time.

Pamela Fletcher and Anne Helmreich describe the project and offer their own conclusions based on their research in Nineteenth Century Art Worldwide, and the London Gallery Market website with their maps and data is freely available.

For over a decade, Stamen has been exploring cartography with our clients and in research. These three maps are presented here for your enjoyment and use wherever you display OpenStreetMap data.

OpenStreetMap is a project utilizing the power of collaboration to create wiki-style maps with open geographical data (viewable, usable, editable). Data are gathered from a variety of sources, including individual GPS units, aerial photography, and copyright-free maps. NYPL has now scanned nearly all of its public domain New York City atlases… and built a web tool where users both inside and outside the Library can virtually stretch old maps onto a digital model of the world à la Google Maps or OpenStreetMap, thus creating a new copy that is not only aligned with spatial coordinates on the Earth, but normalized across the entire archive of old maps… All of this is done collaboratively, through the piecemeal efforts of staff, volunteers, and interns, a group of roughly 1,500 participants worldwide.

Read more about the project here. To participate, begin by creating an account here and then check out a YouTube tutorial here.

Below is a list of humanities-related Geographic Information System projects and their potential applications. Do you know of another exciting project to add to the list? Please let us know!

(View of the “A Portrait of the Artist As a Young Man” Lit Trip, by David Herring)

(“The Grapes of Wrath” Lit Trip in Google Earth, by Jerome Burg)

What it does: Contributors have mapped the journeys of fictional characters on modern and historical maps supplied by Google in Google Maps and Google Earth. These maps can be saved and shared, along with accompanying text and images that also use Google-supplied tools. Routes can cross a single city or whole continents, and users who have downloaded multiple datasets can compare journeys.

How it does it: Google Maps, Google Earth

What this could be adapted for: This is itself an adaptation of a familiar use of GIS. Similar projects could follow the movement of an artist on the Grand Tour, a specific artwork from collection to collection, or a book from its author to printer to eventual reader.

Mapping the Republic of Letters

What it does: The Republic of Letters project maps the physical locations of 6,400 correspondents from 1629 to 1824 and the routes of 55,000 letters and documents exchanged among them. A histogram reveals that the 1760s were peak years for the correspondence recorded in the Electronic Enlightenment database; London and Paris were the top cities of correspondence, and Voltaire, Rousseau, and Locke were the top three letter-writers of the entire period (though Voltaire received very few in return.) The map can display connections between correspondents, city-dots by correspondence volume, routes marked according to their traffic frequency, and a writer vs. writer comparison view. Users can also filter the data by correspondent, choosing between sender or receiver. Finally, data periods on the histogram are adjustable, and a play button allows the user to move through time year-by-year.

How it does it: Probably visualization software and staff-developed tools. A much rougher tool along the same lines could be made with ArcGIS, which is used at the University of Chicago.

What this could be adapted for: Correspondence of any time and place, or exchanges of sketches, trade routes, any other documented physical object; which contemporaries authors cite in their manuscripts, the dissemination of news stories, who marries whom in dynastic marriages…

The Map of Early London

What it does: Toggle-controlled layers displaying roads, building names, ward boundaries, and other points of interest from the late sixteenth to early seventeenth centuries are built on top of the 1560s Agas map. Querying a site will load information about it in a separate window, either a modern history and description or a transcription from contemporary sources that reference it.

How it does it: The map was built with ka-map, which allows for selectable layers, legends, zooming, and panning. Both the original, non-layered map and the more complicated “experimental” version are several years old.

What this could be adapted for: This sort of map/layer/content setup is ideal for connecting texts or images to specific locations, though probably most useful in a limited geographic context like a city. The Map of Early London points out Shakespeare’s theatres and places important to Renaissance drama, but a similar map could go further and build layers associating printers’ shops with particular writers, grouping contemporary performances together in a layer separate from performances a decade later, or go in a non-theatrical direction and study artist-client relationships within Florence, for example, and the network of tradesmen who supplied the artists.

What it does: The atlas compiles a huge amount of information about Roman and medieval sites throughout Europe, the Near East, and North Africa from archaeology and literature, then presents them in an interface. Cities are color-coded according to certainty about their location, but not sorted according to era or culture; though the user can view overlays of kingdoms at the same time, it’s not possible to drag layers so that one overlays the other. Querying points brings up identification, labels visible only at maximum zoom.

How it does it: ArcGIS, the same software used on the University of Chicago campus.

What this could be adapted for: Any sort of atlas project with various sources of data displayed at once.

The Geography of Art: Imaging the Abstract with GIS

What it does: Coddington’s team adapted imaging techniques usually used in GIS to photograph terrain, instead turning it on a Pollock canvas to photograph paint clusters and specific pigments that can be distinguished with multi-spectral imaging. Their results, while preliminary, show that GIS techniques can successfully isolate paint based on texture, pigment, or location, characteristics sometimes invisible to the naked eye or to other imaging techniques. Though Coddington does not discuss this aspect, their integration of GIS imaging and atwork also raises the possibility of treating a canvas itself like a map, placing features of a painting on a sort of coordinate grid and then drawing spatial relationships between them.

How it does it: Multispectral imaging and mosaic software.

What this could be adapted for: The imaging technique is applied here uniquely to art history, but the idea of georeferencing locations on an artwork could be applied to the printed page as an alternative to conventional hypertext. Within art history, underdrawings and a final painting could be distinct layers on a “map” of the artwork, with location labels providing more information on technique or any element of interest. Or, using a Pollock as an example, the georeferenced location of paint globs could lead to a model of the artist’s hand movement.

WhatWasThere is a project based in Ann Arbor, Michigan, which combines GIS data with historic photographs, including many of architecture. Photographs are linked to their location of origin on maps, allowing visitors to the website (or users of the free mobile app) to take a virtual historic tour through cities and neighborhoods. Users may also contribute their own photographs.

The premise is simple: provide a platform where anyone can easily upload a photograph with two straightforward tags to provide context: Location and Year. If enough people upload enough photographs in enough places, together we will weave together a photographic history of the world (or at least any place covered by Google Maps). So wherever you are in the world, take a moment to upload a photograph and contribute to history!

Many of us have heard recent revelations about the kinds of geographic information stored on our mobile devices, including iPhones and iPads. On the lighter side of location tracking, some artists are using this kind of data to create art based on people’s movements and interactions. One such example is Maria Scileppi’s Living Brushstroke project. Her video Anthem includes visualizations from events like Burning Man and the 2010 Chicago Marathon. According to the project’s blog, a Living Brushstroke iPhone app will be available soon. 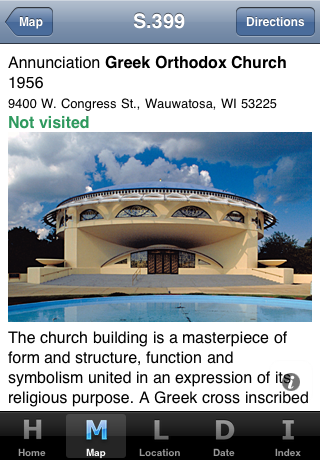 The new Wright Guide, developed by Azara Apps and adapted from William Allin Storrer’s The Architecture of Frank Lloyd Wright, offers descriptions and a photograph of each of the built works by Frank Lloyd Wright. Building descriptions link to other nearby architecture as well as to directions from the user’s current location. Buildings may be searched through the index or by browsing location or date. Users can even keep track of which buildings they’ve visited in the application.

The app is $9.99 and compatible with iPhone, iPod touch, and iPad with iOS 3.0 or later. It is available from the iTunes store.