The Getty’s online magazine The Getty Iris has launched the series Medieval Manuscripts Alive, which features expert speakers reading the languages of the Middle Ages from centuries-old books. It aims to bring the manuscripts’ accompanying illuminations to life through sound.  Each reading is accompanied by a translation into English and a brief description of the relationship between the text and image. In collaboration with the British Library’s Language & Literature audio collection, the Getty’s manuscripts collection will soon be heard in 15 languages, including Coptic, Ge’ez, Arabic and more.

The University of Michigan Library recently announced that it has completed cataloging its entire Islamic Manuscripts Collection, which resulted in the creation if 883 new catalog records and expanding 21 existing descriptions. Now that the project is complete, the entire collection is available in the library’s online catalog, complete with detailed, searchable descriptions.

Additionally, there are digital surrogates for 912 manuscripts from the library’s collection available in the HathiTrust Digital Library. There, users can view the digitized manuscripts in a page viewer or download the entire book or individual pages as PDFs.

The website gives searchable, fast-loading, high-resolution images of the scrolls, as well as short explanatory videos and background information on the texts and their history. The scroll text is also discoverable via web search. If you search for a phrase from the scrolls, a link to that text within the scroll may surface in your search results. For example, try searching on Google for [And the wolf shall dwell with the lamb Dead Sea Scroll].

English translations of the manuscripts are also available. The Google Cultural Institute is also responsible for the Art Project as well as other digital humanities projects, including Versailles 3D and La France en relief. For the Dead Sea Scrolls project, they used imaging technology originally developed for NASA. The scrolls weren’t discovered until 1947, and they had been in the Qumran caves for two thousand years. ArtDaily reports:

The parchment and papyrus scrolls contain Hebrew, Greek and Aramaic script, and include several of the earliest-known texts from the Bible, including the oldest surviving copy of the Ten Commandments. The oldest of the documents dates to the third century BC and the most recent to about 70 AD, when Roman troops destroyed the Second Jewish Temple in Jerusalem. The artefacts are housed at the Israel Museum in Jerusalem, where the larger pieces are shown at the dimly lit Shrine of the Book on a rotational basis in order to minimise damage from exposure. When not on show, they are kept in a dark, climate-controlled storeroom in conditions similar to those in the Qumran caves, where the humidity, temperature and darkness preserved the scrolls for two millennia.

The Book of Kells was released as an iPad app last Friday, November 16. The app contains all 680 surviving pages of the manuscript as well as other special features and content. It is intended to replace previous electronic reproductions of the manuscript which had been released on DVD-ROM and CD-ROM.

The app features the entire manuscript in high resolution, with 21 pages viewable at up to 6 times their actual size and categories of decorative themes that users can browse through including letters, animals, and other symbols.

You can also stop by the VRC anytime to check out the “eBook of Kells” app! Best of all, the app can be projected from the iPad for use in classrooms and presentations.

For more information, view the Book of Kells website or the iTunes app store.

[Images: The Book of Kells, folio 7v and 8r, and an image group of initial letters for the letter “A”.]

Yesterday the New York Times announced, “The Leo Baeck Institute, a New York research library and archive devoted to documenting the history of German-speaking Jewry, has completed the digitization of its entire archive, which will provide free online access to primary-source materials encompassing five centuries of Jewish life in Central Europe.”

The online collection for the Leo Baeck Institute is called DigiBaeck, and is:

In addition to manuscript material and archival photographs, more than 2,600 art objects have been digitized and are accessible on the website. While there is a lot of material digitally available now, on October 16, the expanded archive will be released online, representing the archive online in its entirety.

Via the New York Times 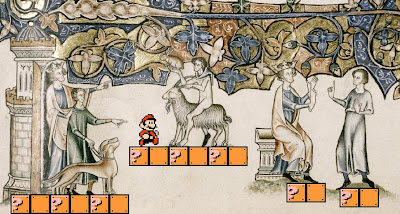 Carl Pyrdum of Got Medieval (with a little help from Mario) makes a clever argument for the illustration of gravity in the margins of medieval manuscripts:

In order to keep the man and his goat in the middle from falling right on through the bottom of the page, the artist draws in little patches of ground beneath them. Mario, no stranger to platforms that hang in the air as if bolted to the background, would feel right at home with this arrangement.

is an online, interactive database of seal impressions found in Islamic Manuscripts… as a visitor to the site, you are invited to participate in deciphering the seals, identifying the individuals or institutions named, and adding information such as other sources of the same seal impression or other seals that name the same individual or institution.

As there is currently no convenient means by which to find or share information on seal impressions, we hope that this database will be a useful resource for anyone working on Islamic manuscripts.

A user guide is available here. Individual seals are available for download as low-resolution files for teaching or research. Seal records are also linked to the full manuscript so entire folios may be easily viewed.

The Morgan Library and Museum features online exhibitions, including high quality, zoom-able digital images of works in the collection. A recent example of this is the digital facsimile of The Black Hours (MS M.493), a Book of Hours from 1470 created on vellum and stained or painted black:

The result is quite arresting. The text is written in silver and gold, with gilt initials and line endings composed of chartreuse panels enlivened with yellow filigree. Gold foliage on a monochromatic blue background makes up the borders. The miniatures are executed in a restricted palette of blue, old rose, and light flesh tones, with dashes of green, gray, and white.

The Bayerische Staatsbibliothek now presents 20 manuscripts from its voluminous Oriental collection in the form of an application for iPads and iPhones. The “Oriental books” are available free of charge in the Apple App Store.

With the help of a Preservation and Access Grant from the National Endowment for the Humanities, and with additional funding from an anonymous donor, the Walters has completed its program to create digital surrogates of its collection of Islamic manuscripts and single leaves. Images are free for any noncommercial use, provided you follow the terms of the Creative Commons license specified by the museum.

Images of the manuscript are available for download from Flickr, including high-resolution images. Full manuscript PDFs (including data) are also available on the Walters website (see the above example here).