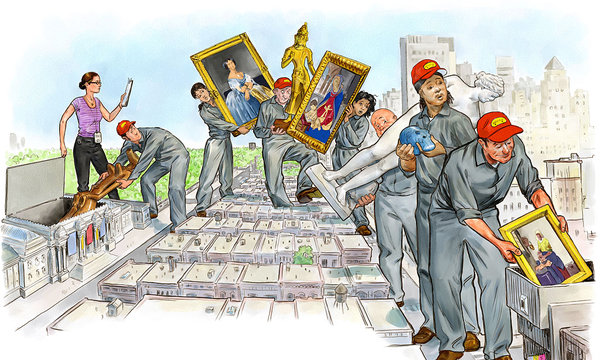 Last week The New York Times published an opinion piece titled “Opportunity on Madison,” or What the Met Should Do When It Moves into The Whitney. The author discusses The Metropolitan Museum of Art’s recent lease of The Whitney Museum’s Marcel Breuer building on Madison Avenue (to be vacated by The Whitney in 2015) and the Met’s decision to display collections of modern and contemporary art there.

I love the 1966 Breuer design. With its trapezoidal windows and stepped-back facade, it’s what the Guggenheim isn’t: starchitecture with the right amount of ego, meaning that it works for art. Almost everything looks good in it. And the Met’s residency, contracted to last at least eight years, seems like a great idea on paper. The Whitney Museum of American Art gets to keep its celebrated building, and the Met, which can never show more than a small fraction of its encyclopedic collection, gets some desperately needed space.

But the Met’s use of that space primarily for new art would be a big mistake.

What do you think? Should The Met utilize the space to house curated shows that include art from many eras, as the author suggests, or for contemporary and modern art, or something else?