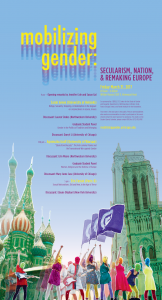 Over the last several years, the entanglement of gender, nation, and secularism has become sharply visible in Europe. From the 2010 “Cologne Attacks,” in Germany, when roving bands of young men (many who were said to be either foreign nationals or refugees) sexually assaulted and robbed young women during New Year’s festivities, to the rise in anti-LGBTQ, misogynist, and xenophobic legislation across the continent, to the precipitous decision last week in the Hungarian Parliament to outlaw the continued operation of the Central European University, a crucial hub for gender studies instruction and research, a diversity of issues across the continent have sparked conversations around gender that continue to reverberate in the international political arena.  On Friday, March 31, 2017, scholars from across disciplines gathered to discuss such emergent gendered global linkages at a one day mini-conference, entitled Mobilizing Gender: Secularism, Nation and Remaking Europe, hosted by the University of Chicago. The conference featured scholars from Europe and the United States who drew from both the humanities and the social sciences to probe the day’s themes of gender, sexuality, nationalism, and secularism. 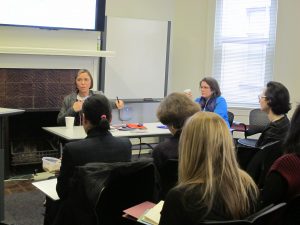 In the opening plenary, anthropologist Sarah Green (University of Helinski) explored relationships between desire, borders, and locations, in particular their contemporary and historical intersections on Lesvos, an island situated between Greece and Turkey. Having witnessed the influx of over 2 million refugees to the island in summer of 2015, Green had been struck by how incongruous the tired yet hopeful refugees waiting in legal and political processes of incorporation appeared in juxtaposition to the islanders and tourists continuing with everyday life. However, Green argued, given its ambiguous political location between the EU and Turkey, Lesvos is in fact a site with a densely-layered history of “crosslocations,” a term she uses to refer to the phenomenon of many people inhabiting the same physical space, yet occupying multiple locations. Notably, while Lesvos is internationally known as a destination for lesbian tourists seeking to pay homage to Sappho’s ancient home, because of the border it shares with Turkey the island has also played an important local role in the mediation of sexual relationships, real and imagined, between the two culturally similar yet historically antagonistic states. Focusing on the interplay between discourse, metaphor, and the practicalities of crossing legal and political mechanisms, Green argued that borders and border regimes are ideal sites from which to explore how difference is constructed, controlled, and envisioned as an object of desire or fear. As highlighted by comments from discussant Lauren Stokes (Northwestern University), Green’s research suggests the necessity of challenging facile and xenophobic (cartographic) representations of “migrant flows,” considering how the current refugee crisis instead represents yet another moment of crosslocation in Lesvos, at which identity and desire are being negotiated from myriad locations in the same geographic space. 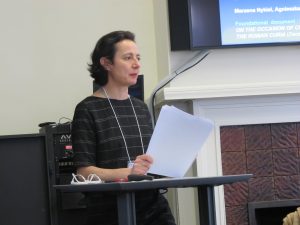 Building upon themes of borders, gender, and difference touched upon by Dr. Green, Dr.  Agnieszka Graff (University of Warsaw) led the second plenary of the day with an incisive discussion of international efforts to eradicate liberal ideologies of gender and sexuality. Through an analysis of Poland’s “anti-gender” movement, Graff offered explanations and implications of the rise of what she envisions as a transnational right-wing “war on gender.” Centered in eastern Europe and Russia, anti-genderism is a coherent anti-intellectual movement populated by actors from across global right, which selectively borrows from liberal left and feminist ideology to create a new universalism that conceives of human rights as based in a traditionalist idea of the family. Graff asserted that anti-genderism is a political, not religious, project that envisions itself as the defender of “ordinary people” across the globe, a response to an international leftist elite seeking to colonize countries untouched by Marxism and the sexual revolution. Thus, Graff underscored, although anti-genderism stands in opposition to gender studies and feminist (or “genderist”) projects that in the last several decades emerged throughout central and eastern Europe, it actually mobilizes the post-colonial rhetoric on which many of those schools of thought rely in order to exacerbate sentiments of Western guilt and fear. As such, Graff challenged scholars to consider the implications of the longstanding “perverse affinity” (Fraser 2013) between feminism and neoliberalism, now being exploited by the global right, concluding with a call for more universalist modes of rhetorically combating global conservatism. Indeed, following comments by discussant Erin Moore (Northwestern University), a lively debate ensued regarding the dangers and possibilities of abandoning post-colonial frameworks in feminist and women’s/gender studies, leaving open questions regarding the obligations of scholars and activists to attend to the both the universal and the particular in their work at the current political moment. 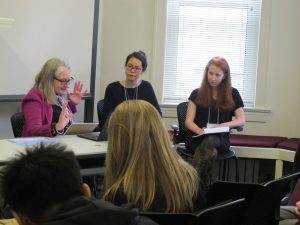 These distinguished lectures were punctuated by general discussions and two graduate student panels that touched upon the day’s themes. The first panel focused on “Gender in the Politics of Tradition and Belonging,” and featured papers on anti-homosexual rhetoric in Russia and Zimbabwe (Raffaella Taylor-Seymour, Anthropology & Comparative Human Development), gendered moral authority and the politics of contemporary food safety reform in Tbilisi, Georgia (Natalja Czarnecki, Anthropology), and the relationship between anti-immigration and anti-Muslim movements, Christian nationalism, and secularism in the Czech Republic (Michaela Appletova, History). Facilitated by Darryl Li (University of Chicago, Anthropology), the panel highlighted the ways in which gendered (masculinist) authoritative discourses take shape and circulate as a form of expertise. A second panel, facilitated by Mary Anne Case (University of Chicago Law School) addressed questions pertaining to “Women, Religion and the Defense of Europe,” featuring papers on the role of Catholicism in Ireland’s abortion debates (Kelsey London Robbins, Comparative Human Development), and gendered pedagogies of literacy in francophone Geneva (Shirley Yeung, Anthropology). 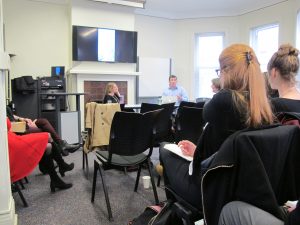 In the conference’s closing address, Éric Fassin (Université de Paris 8) presented a substantive exposition of what he refers to as the “actualité sexuelle”, the shifting gendered tensions that define the present transnational moment, using the example of France to consider how sexual nationalisms function in both national and geopolitical frameworks.  Following the rise of essentialist discourses of French nationalism surrounding the Republican Revival of 1980s, Fassin explained, sexual complimentarity emerged in the 1990s as the hallmark of “Frenchness,” a contrast to the radical sexuality (communautarianism) of America. However, with the rise of the païx (marriage equality) and parité (equal rights) movements of the late 1990s, the myth of the privatization of sexuality in France shattered and debates about sex unfolded through universalist paradigms, a shift that later enabled public figures and politicians such as Nicolas Sarkozy to use “democratic” discourses of sex and laïcité to racialize immigrants and Muslims living in France in the early 2000s. When Fassin and others thus assembled in a controversial conference around a théorie du genre a decade later, the same year the manif pour tous (anti-gay marriage) movement took hold, debates around race, religion, gender, sexuality, and nationalism reached yet another turning point, characterized by the formation of tentative alliances between conservatives of different (religious) backgrounds who were at the time mobilizing around either issues of race or gender. Fassin’s summative remarks, taken in concert with comments by Professor Elayne Oliphant (New York University), signaled the importance of attending not only to the ways in which such discourses of nationalism, gender, race, and religion shift in response to international politics, but also the different actors and institutions that mediate these discourses and create political actors.

Mobilizing Gender was organized by Jennifer Cole (Comparative Human Development) and Susan Gal (Anthropology; CEERES Director), and realized with the assistance of Esther Melinda Peters and Merideth Clason (CEERES) and with generous support from CEERES, 3CT, Center for the Study of Gender and Sexuality, Department of Anthropology Lichtstern Fund, France Chicago Center, and Franke Institute for the Humanities.