Media and Power In Contemporary Russia and Beyond

The medium is the message, and the message is the moral, at least in Putin’s Russia. On April 27th, participants in University of Chicago’s conference Media and Power in Contemporary Russia and Beyond gathered to discuss the media and messages currently circulating in the post-Soviet space. Topics ranged from puppets to hate crimes, from Veshnoria, a country that does not exist, to a novel that would get Putin to resign, which also does not exist (yet). Conversation frequently circled back to questions of morality. This reminds us that the media’s integrity is not just a matter of dispassionate academic interest, but also something people value and fight for. 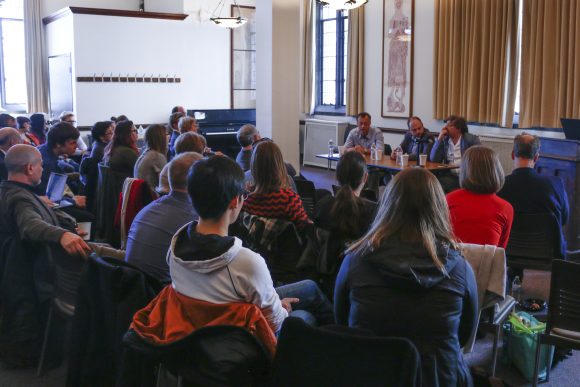 It was therefore appropriate that discussion began with two people who do not just stand on the sidelines of Russian media, but are active participants in it. Vladimir Kara-Murza, a prominent opposition activist and journalist, and Dmitrii Bykov, an iconic figure in Russian journalism and literature, joined in conversation with University of Chicago’s Konstantin Sonin, a journalist and economist from Russia. Mr. Bykov’s quip about the irony of three Russians conversing in “poor” English (all three spoke excellent English) in front of a primarily Russian-speaking audience was a sobering reminder of media politics in Russia, where discussions are constrained by different limits. Mr. Kara-Murza is a—thankfully, still—living example of the stakes involved in openly criticizing Putin: he accuses the Russian government of attempting to assassinate him twice by poison. This, clearly, is a violation not just of media freedom, but also of basic morality.

However, even in a conversation between three Russians publicly opposed to Putin, it became clear that the narrative of media freedom is not “black and white,” as Dr. Sonin put it. All three discussants contextualized the situation today in the history of the past century. Mr. Kara-Murza, a historian by education, attempted to dispel the myth of Russians as a passive people who need a strong leader by arguing that when given a choice, Russians always have chosen democracy and its accompanying freedom of speech, such as the period following the 1905 revolution and the 1990s. Dr. Sonin asked Mr. Kara-Murza to compare Putin’s government’s alleged attempts to silence him with more outright Stalinist purges. Mr. Bykov said that the Soviet Union should be “condemned for its deeds but praised for its words,” which he believes espoused admirable values. Today, he contends, Russia is more free than the United States because politicians are free from responsibility for their words, but this is not a good thing, because freedom from morals means no morals in Russia’s case. 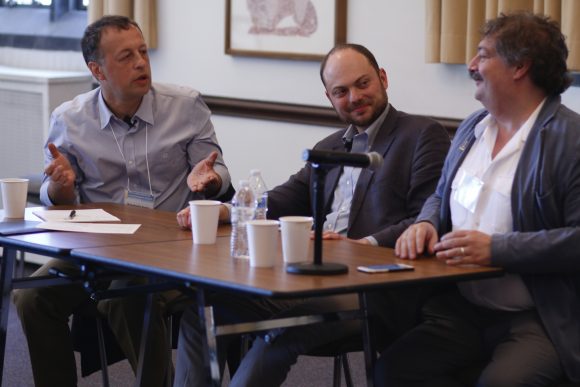 If Russia is amoral today, who is responsible? Dr. Sonin thinks that perhaps the intelligentsia should have foreseen the situation and warned the people, rather than feeding into the problem with cultural products, such as the movie Brat. Neither Mr. Kara-Murza nor Mr. Bykov agreed with this assessment. According to Mr. Kara-Murza, the answer is clear: Putin is responsible, and opposition to Putin’s regime, which defies basic morality constructs such as the commandments “thou shalt not kill” and “thou shalt not steal,” is a fundamental moral issue. Additionally, he thinks athletes and fans should attend events like the Sochi Olympics and the 2018 World Cup, but world leaders should not, because their presence tacitly condones Putin’s regime. Mr. Bykov has a softer stance; he thinks Putin is not beyond salvation. Having asserted that Soviet censorship actually helped Russian writers become better at using metaphors, he claimed that he could write a novel with an extended allegory—in short, an overzealous tiger keeper ends up killing all his tigers—that would make Putin understand the error of his ways and choose to resign. Everyone laughed and agreed that Mr. Bykov should go ahead and write that book.

[[Please note: the subtitles within this video are partially auto-generated and are still being edited for accuracy and clarity]]

Political symbols, like Mr. Bykov’s tigers, are important outside of literature as well. Susanne Wengle of the University of Notre Dame and Christine Evans of the University of Wisconsin-Milwaukee analyzed the political symbolism of Pryamaya Liniya (Direct Line), an annual program in which Putin responds to questions and requests from citizens from every corner of Russia. Drs. Wengle and Evans noted that Pryamaya Liniya, with its focus on Putin as a central figure addressing the population’s concerns, at first glance seems to support the idea of Putin’s Russia as a personality-centric, deinstitutionalized state. However, they argue that the program actually strengthens institutional systems: the medium is an institution that gathers information and Putin’s messages on it are largely about institutions. This “performance of power” on state TV separates concerns that the state considers to be legitimate from those that are taboo, but also unites personal power with state institutional power, neatly packaged for home viewing. 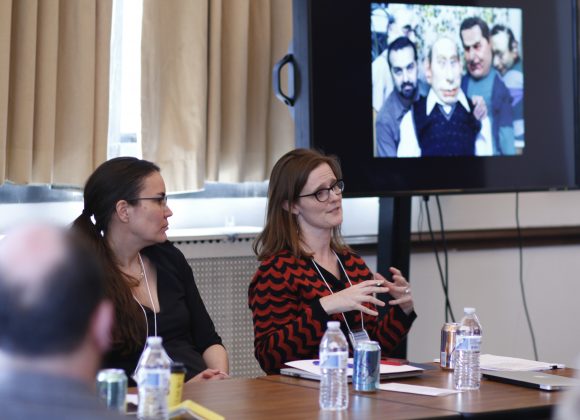 If Pryamaya Liniya is a “spectacle” for the living room, Kukly had gone further, taking “the carnival into the living room.” William Nickell of the University of Chicago discussed how Putin has gone from being represented as puppet on the satirical former NTV program Kukly (Puppets) to being represented as a puppet master in western media. At first Kukly writers portrayed Putin as merely a political tool raised from obscurity to power by oligarchs, notably in an episode that particularly enraged Putin called Kroshka Tsahes (Little Zaches). Putin demanded that his puppet be removed from the show, and the writers briefly complied, mockingly depicting Putin in the next episode as the burning bush of the Old Testament. Putin seized control of the narrative a year later when state-owned Gazprom took over of NTV, and he began to transition from the puppet to the person pulling the strings in popular imagination. While some in Russia lament the loss of media freedom, others question whether the show crossed a moral line, becoming counter-productive, and the show’s main writer Shenderovich has suggested that the show might have been saved if he had manipulated Putin’s character more subtly.

The resurgence of patriotism that may motivate retrospective popular support for shutting down Kukly is not limited to Russia. Elena Gapova of Western Michigan University discussed nation-building in the digital age, using Belarus as an example. While the internet is commonly perceived as a tool of globalization, it can also be a platform to express national identity. She contends that national expression on the internet is a form of participatory “banal nationalism,” that is, daily reminders of who is “us” and who is “them.” In this framework she says that the discourse is often that “ ‘they’ are evil; they kill our poets, rape our women,” but she is less concerned with the moral message of online nationalism than with its medium. Digital storytelling can promote flattering historical narratives and create (cyber)spaces for national language, such as Wikipedia. One striking example is the fake country Veshnoria, which was created as part of a Belorussian military exercise and later became an internet meme with a life of its own. 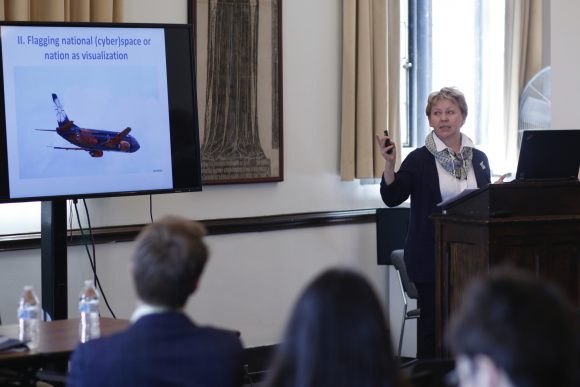 Fake countries, fake news; what happened to pravda (truth)? Natalia Roudakova of University of California, San Diego presented on her recent book Losing Pravda: Ethics and the Press in Post-Truth Russia. Attempting to explain why the quality of journalism in Russia declined after 1991 even as freedom of the press increased, Dr. Roudakova theorized a change in epistemology. In the Soviet era, both the government and dissidents valued the truth and believed it existed. Now, the prevailing idea is that truth is plural, that there are “no facts, only interpretations.” She talked about the evolution of styob, a form of cynical satire, described by Aleksei Yurchak and others. Belief in the existence of objective truth and morality, even if it seemed elusive, grounded early styob in the late Soviet period and the 1990s; the cynics had the potential to become activists. However, in new styob, “moral certainties have eroded” and an overwhelming amount of content, often positing conflicting truths, has created a different, disengaged, passive cynicism. According to Dr. Roudakova, reduced valuation of truth and morality go hand in hand in Russia. 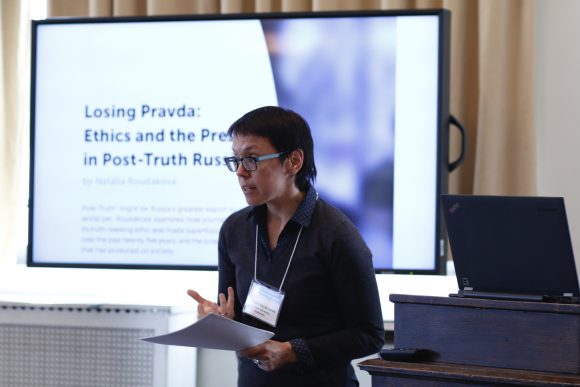 In some cases, however, destruction of truth through fake news can also create new morals. Eliot Borenstein of New York University showed how fake news stories–purporting the crucifixion of a child in Eastern Ukraine, the rape of a Russian girl by a Syrian migrant in Germany, and the rape of a Russian child in a Putin costume who was seized by child protection services in Norway–are part of a “new approach to morality in the name of the child.” Dr. Borenstein described the Russian idea of “Gayropa,” gay Evropa/Europe, where androgynous, weak men can’t protect women and children and willfully work to destroy the family. The Russian state is seen as a stronghold of the traditional family, while simultaneously acting itself as a paternal figure for its citizens. This “clash of civilizations” between Russia and the West has been represented as a struggle between “morality and vice.”

Least of all does the Russian state want “Gayropa” to become “Gayrussia.” Drawing on the rhetoric of protecting children, Putin defended the law against gay “propaganda,” saying that people are free to do what they want, but “just leave the kids alone, please.” Alexander Kondakov of the University of Wisconsin-Madison and his team compile news reports of LGBT-related violence in a database. He analyzed the language of the reports and found that before the law, vocabulary was “richer.” Language implying moral condemnation of LGBT people could often be found alongside neutral terms. However, after the law reports started to mimic its language of “nontraditional sexual relationships.” He also concludes based on these and other data that the frequency of hate crimes has increased since the law was passed.

These presentations showed that the powers that control the media use them to shape morality. That is, the medium of state-dominated outlets is the state-sanctioned message is the state morality. In short, power mediates morality. The state may exercise control through silencing, as in the attempts on Vladimir Kara-Murza’s life, taking over Kukly, and banning gay “propaganda.” This is the narrative most familiar to Western audiences. However, censorship alone cannot account for a decline in morality. As Dmitrii Bykov pointed out, censorship in the Soviet era did not change the moral message, but shifted the creative medium to more allegorical modes. Contemporary Russia differs from the Soviet era because the state also controls media by turning up the volume, creating a cacophony of (plural) truths and half-truths and lies, which the nation readily shares on Facebook and VKontakte. Thus we get the rehearsed voices of Pryamaya Liniya, the Veshnorias, the post-truth styob, the boys in Putin costumes.

The last word of the conference, however, was one of hope. An audience member, tying together her teaching experience with Mr. Kara-Murza’s description of millennials demanding media freedom, and Dr. Roudakova’s comment that perhaps young people can break passive cynicism with sincerity, expressed optimism about the future. In order to reclaim control over morality, the people not only must speak out from censored silence but also, simultaneously, mute the cacophony of confusion. It is a difficult task. The good news is that once they have done it, they have already won; the message itself does not so much matter. It is the medium–more precisely, making media their medium—that will be their message.

2 Responses to Media and Power In Contemporary Russia and Beyond