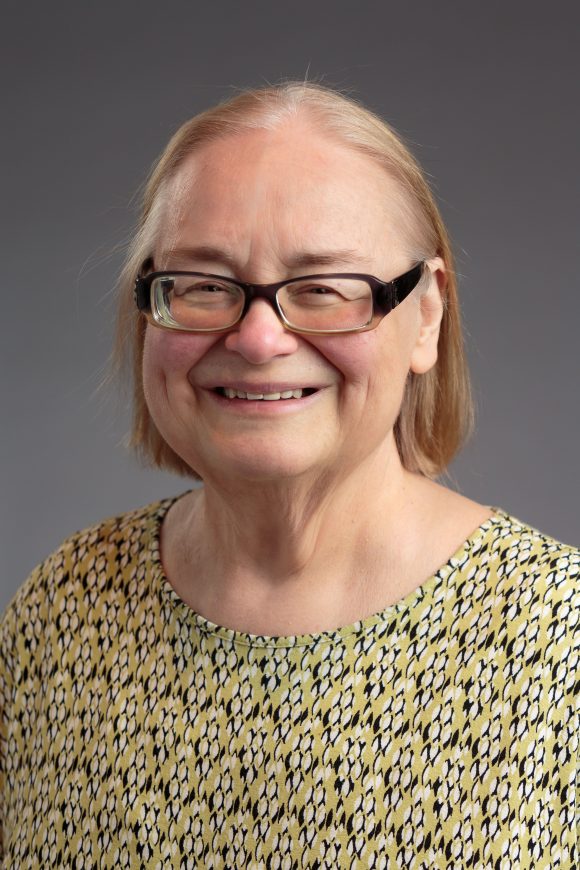 June Pachuta Farris, who passed away on July 27, 2018 after a brief illness, was both a scholar in her own right and a devoted supporter of scholarship through her work. Her work greatly benefited UChicago’s Center for East European and Russian/Eurasian Studies (CEERES) as well as scholarship in general relating to the CEERES area. June earned her B.A. (Magna cum laude and Phi Beta Kappa) in Russian and French from Case Western Reserve University in 1969, an M.A. in Russian Language and Literature at The Ohio State University, with a thesis on Dostoevsky and Camus, in 1971, and an M.A. in Library Science at the University of Denver in 1973. She also studied Czech at Charles University in Prague (1980, 1981) and Russian at Pyatigorsk State Pedagogical Institute (1970). She was the Slavic Bibliographer and then the Slavic Reference Librarian at the University of Illinois, Urbana-Champaign 1973-1986, and she was the Bibliographer for Slavic and East European Studies at Regenstein Library from 1986 until her passing. She published, edited, or co-edited more than twenty bibliographies and bibliographic series on various topics all relating to the CEERES area. She was an active participant in numerous scholarly organizations, presenting papers at the annual meetings of the Association for Slavic, East European, and Eurasian Studies (formerly the Association for the Advancement of Slavic Studies), the American Library Association, the North American Conference Czechoslovak Academy of Arts and Sciences, the World Congress of Central and East European Studies, as well as many workshops and activities designed to enhance the research capabilities of students and colleagues. Starting from 1999, she also curated 38 exhibitions at Regenstein Library. Over the years, she was the recipient or principal investigator for over $400,000 in grants for the improvement of resources and access for various library collections.

In 2012, the Association for Women in Slavic Studies (AWSS), an affiliate of the Association for Slavic, East European & Eurasian Studies (ASEEES), awarded June its Outstanding Achievement Award. It was the first time that a librarian was honored with the award. The AWSS citation is worth quoting in full:

Serving for more than twenty-five years as the Bibliographer for Slavic and East European Studies at the Joseph Regenstein Library of the University of Chicago, June has developed a superb collection of Slavic, East European and Eurasian resources, many of them found nowhere else in the world. As one of her colleagues at the University of Chicago has noted, in addition to developing a “world-class collection at a world-class research library,” June also “understands the importance of the kinds of ephemera not found in most library collections.” Scholars and students at the University of Chicago are far from the only beneficiaries of her expertise, however. The entire profession has been enriched by June’s unassuming yet dedicated commitment to helping scholars wherever they work — whether formally, through her many published bibliographies on subjects as diverse as Dostoevsky and Czech and Slovak émigrés, or informally through her willingness to respond to countless queries from individuals. June’s services to the field of women’s and gender studies make her an especially deserving recipient of this award. Members of AWSS have grown to depend on her quarterly and annual Current Bibliography on Women and Gender in Russia and Eastern Europe, which has appeared in the AWSS Newsletter since 1999. Collaborating with Irina Liveazanu, Christine Worobec, and Mary Zirin, June also produced an invaluable two-volume publication, Women and Gender in Central and Eastern Europe, Russia, and Eurasia: A Comprehensive Bibliography (2007). Last but far from least, June is known by her fellow Slavic librarians as a generous mentor. As one of them has written, “over the years she has taught me most of what I know about the field.” For her selfless, consistent, and dedicated service to scholars, students, and fellow bibliographers, AWSS is proud to honor June Pachuta Farris.

To this I can add that June played a crucial role when CEERES successfully applied for Title VI funding as a National Resource Center for 2006-2010 and when the grant was successfully renewed for 2010-2014 and 2014-2018. (CEERES is still awaiting notification concerning its application for 2018-2022, but if the grant is received, June will have played an important role in that renewal as well).  Strength of the library collection is one of the ten major qualifications for Title VI funding.  That the collection is as strong as it is can be attributed to June’s excellent work. Moreover, when it was time to apply for funding or renewal, June did not just supply the necessary data, she wrote the entire library section of the application (which, when I was director of CEERES, I then only had to pare down to fit the overall word limit). June was always ready to (successfully!) help faculty and students find resources, as well as taking the time and trouble not only to build Regenstein’s collections by acquiring and accepting a vast array of relevant materials, but also by making sure that duplicates found good homes in other research libraries, and exchanging them for materials needed by Regenstein.

With June’s passing, Slavic, East European, and Eurasian studies has lost an outstanding contributor. She will be sorely missed and fondly remembered by all who knew her.

Colleagues are invited to send tributes and stories about June and her impact to junefarrismemories@lib.uchicago.edu.  These will be collected, shared with June’s family, and deposited in the University Archives.

The University of Chicago Library has a detailed survey of June’s bibliographic work on their site.