PROTEST LETTER IN SUPPORT OF CEU 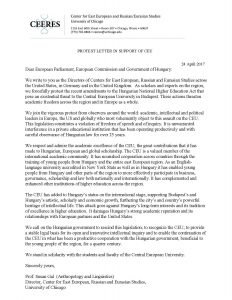 We write to you as the Directors of Centers for East European, Russian and Eurasian Studies across the United States, in Germany and in the United Kingdom.  As scholars and experts on the region, we forcefully protest the recent amendments to the Hungarian National Higher Education Act that pose an existential threat to the Central European University in Budapest. These actions threaten academic freedom across the region and in Europe as a whole.

We join the vigorous protest from observers around the world: academic, intellectual and political leaders in Europe, the US and globally who most vehemently object to this assault on the CEU.  This legislation constitutes a violation of freedom of speech and of inquiry. It is unwarranted interference in a private educational institution that has been operating productively and with careful observance of Hungarian law for over 25 years.

We respect and admire the academic excellence of the CEU, the great contributions that it has made to Hungarian, European and global scholarship. The CEU is a valued member of the international academic community. It has nourished cooperation across countries through the training of young people from Hungary and the entire east European region. As an English-language university accredited in New York State as well as in Hungary it has enabled young people from Hungary and other parts of the region to more effectively participate in business, governance, scholarship and law both nationally and internationally. It has complemented and enhanced other institutions of higher education across the region.

The CEU has added to Hungary’s status on the international stage, supporting Budapest’s and Hungary’s artistic, scholarly and economic growth, furthering the city’s and country’s powerful heritage of intellectual life. This attack goes against Hungary’s long-term interests and its tradition of excellence in higher education.  It damages Hungary’s strong academic reputation and its relationships with European partners and the United States.

We call on the Hungarian government to rescind this legislation; to recognize the CEU; to provide a stable legal basis for its open and innovative intellectual inquiry and to enable the continuation of the CEU in what has been a productive cooperation with the Hungarian government, beneficial to the young people of the region, for a quarter century.

We stand in solidarity with the students and faculty of the Central European University.

This letter was also signed by affiliates of Chicago CEERES: