On October 20, 2016, the University of Chicago community joined Dragan Kujundžić, Professor of Germanic and Slavic Studies, and Film and Media Studies at the University of Florida, to celebrate the renowned Russian film director Alexander Sokurov and his latest film Francofonia. The event was sponsored by the Franke Institute for the Humanities, CEERES, The Chicago Center for Jewish Studies, The Transnational Approaches to Modern Europe, and the Departments of Cinema and Media Studies and Comparative Literature.

Leah Feldman, Assistant Professor of Comparative Literature at UChicago, began the evening by introducing Kujundžić. Professor Feldman lauded his work across Slavic Studies and Comparative Literature, especially his work on post-colonial studies and on Derrida. She singled out his innovative work as a filmmaker and his spirit of dialogue as particularly deserving of praise. 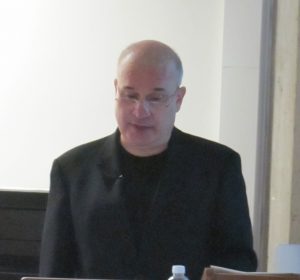 For the first part of the evening, Kujundžić contextualized Sokorov’s work in a lecture adapted from his essay “The Museum Fever of the Old World: A Conversation with Alexander Sokurov” (2015). Kujundžić declared Sokurov to be the greatest Russian filmmaker alive; no one, he went on to explain, had been more innovative in placing the cinematic image within the tradition of art history. In the remainder of his talk, Kujundžić delved into Sokurov’s “colossal battle” with the Soviet tradition, his understanding of the museum space, his connections to St. Petersburg and Petrine modernity, and his inability to escape the memory of the Leningrad blockade. Before introducing his own film, playfully titled Cinemuse: Selfie With Sokurov, Kujundžić took a couple of questions from the audience concerning Sokurov’s relation to the French film theorist and critic André Bazin.

Cinemuse: Selfie With Sokurov is based on Kujundžić’s interview of Sokurov at the Lenfilm movie studio in St. Petersburg on September 25, 2015. The film is divided into brief sections, such as “Literature and Film,” “Museum Fever,” and “Revolution or Evolution.” The conversation becomes more intimate as it progresses, and the camera 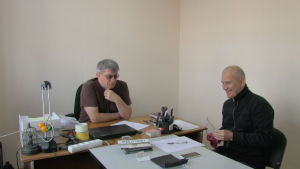 accentuates this feeling by gradually zooming in closer and closer on Sokurov. Selfie With Sokurov reaches a peak of emotional intensity in its third quarter, where an affected, and perhaps even teary-eyed, Sokurov responds to questions on “Death” and “Religion.” 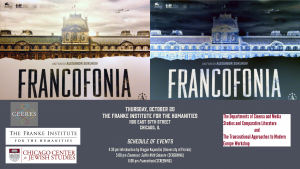 Following a brief break for refreshments, the long-awaited screening of Francofonia commenced. Echoing themes from Sokurov’s previous films, Francofonia follows the Louvre director Jacques Jaujard and Nazi Occupation officer Count Franziskus Wolff-Metternich in their efforts to preserve the museum during World War II. The movie explores three interconnected questions, which are asked by the narrator in an early part of the film: Is the Louvre worth more than all of France? What would France be without the Louvre—or Russia without the Hermitage? What would we be without museums? At the conclusion of the film, the audience appeared to be as moved as Sokurov was in the later part of Kujundžić’s film. The event ended after Kujundžić took some additional questions from the audience, which probed, among other aspects of his work, Sokorov’s use of violence and suturing in connection to his fraught relationship with the Russian avant-garde.