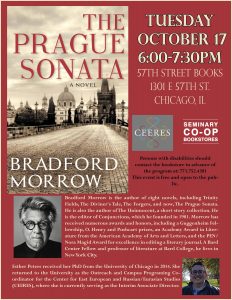 In January 2017 the Center for East European and Russian/Eurasian Studies and the Seminary Co-op Bookstore decided to formalize our partnership and we created A CEERES of Voices, an author-centered series of readings and conversations on books from or about Central and Eastern Europe, Russia, Central Eurasia, and the Caucasus.  On October 17, 2017 the CEERES and Seminary Co-op Bookstore and opened this year’s CEERES of Voices with a discussion of The Prague Sonata with novelist Bradford Morrow and Esther Peters.

A grand epic that was over twelve years in the making, The Prague Sonata is award-winning writer Bradford Morrow’s masterpiece. Following the trail of a lost eighteenth-century sonata manuscript, this literary quest novel moves back and forth in time –— from Nazi-occupied Czechoslovakia to modern-day Greenwich Village; from postwar London to the heartland of immigrant America—telling, ultimately, a story of the trials and triumphs of love over the course of generations. Following the main discussion, Bradford Morrow and Esther Peters sat down for a more informal chat about the novel, the research that went in to this novel, and the challenges of writing more broadly. You can watch the full conversation here:

If you missed any of last year’s events you can watch interviews with the authors here. We are excited that this series is continuing this year.