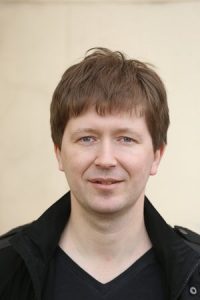 Andrei Soldatov is a Russian investigative journalist, co-founder and editor of Agentura.ru, a watchdog of the Russian secret services’ activities. He has covered security services and terrorism issues since 1999. With Irina Borogan he is co-author of The New Nobility: The Restoration of Russia’s Security State and the Enduring Legacy of the KGB and The Red Web: The Struggle Between Russia’s Digital Dictators and the New Online Revolutionaries. He will be in Chicago this upcoming November to participate in the ASEEES Annual Conference and the Chicago Humanities Festival. In these various presentations he will be discussing what he describes as “a strange phenomenon about the Russian Internet: there are very few countries in the world where the local Internet companies dominate, and Russia, with its recent totalitarian past, is one of them. We have Yandex, the Russian Google, Mail.Ru, the local Gmail, and Kaspersky, to name but a few. Yet when the Kremlin started its offensive against internet freedoms, we’ve seen very little resistance from these companies. Moreover, some of the companies were happy to lend a hand to the Kremlin when it needed their help. The Soviet legacy is clearly part of the reason.”

For those interested in these issues, you can see Andrei Soldatov in one of the following presentations:

Please note that registration for the ASEEES Annual Conference is required  to attend the Presidential Plenary (11/10) and the Roundtable (11/12). Please see the Chicago Humanities Festival webpage for more information about the ticket availability for the discussion on November 11.

In advance of these presentations, Andrei was gracious enough to answer a few questions about The Red Web and his writing more broadly. The interview was conducted through email and has only been edited for clarity.

Perhaps you could start by telling us a bit about The Red Web, particularly the recently added chapter on the 2016 U.S. Elections.

Our book is about the Russian Internet, and what happened when the Kremlin faced this formidable challenge (and it is formidable, as the Russian history for centuries was defined by an hierarchical order, and the Internet is a horizontal creature by definition). When the book was published, in 2015, our main conclusion was that the Kremlin had largely failed to find a way to put it under control. But since then there have been some developments, notably the U.S. election, and we felt it was important to look at it and share what we found by adding a new chapter. There is one thing which needs to be explained: how did the Kremlin, understanding apparently so little about the nature of the global network when it comes to its domestic market, found a way to use it effectively beyond its borders, moreover in the very country where the Internet was born?  And this is the story we tell in the new chapter.

How would you describe your research and creative process in this book?

Oh, it’s very technological. First we prepared a very general plan of the book, but the next phase was to write detailed outlines for each chapter, with the names of all people – protagonists and witnesses – we needed to talk to write them. We got big sheets of paper, wrote them down and then hung them all in one of the rooms of our apartment. It looked a bit crazy, as the room is painted red, with all these sheets hanging around, but it helped. And then the most difficult phase was to get people talking. It’s very difficult in Russia for two reasons – first, because the climate in the country doesn’t encourage to talk to journalists about sensitive issues. Second, because of some specifics of the Russian mentality: we Russians don’t like to talk about our feelings, so when you ask some bureaucrat how did he feel making some decision, the usual answer was “What? I feel fine!” So it needs lot of patience to get them talking about themselves.

Did the research or writing process differ in any way from your previous writing?

Yes. The first book, The New Nobility, was mostly based on our research about the Russian secret services we had been doing for almost 10 years. For security reasons, we decided to be very careful with outsiders about the fact that we were writing the book, and to limit our contacts. For the Red Web it was completely different; we needed to reach out many people and talk to them.

You mention quite explicitly in the prologue to the book, you wrote the book as a journalist and as a participant in some of the events chronicled in the book. What motivated that choice?

For a journalist it’s not very normal to “be part of a story.” In fact you are always taught not to do that. And we didn’t place ourselves in our first book, The New Nobility. With the Red Web, it was not an option. As it happens, my father played a crucial role at several stages in the history of the Russian Internet, and I felt it would be unfair not to give the reader all information. We also felt that our personal experience could help the reader understand what it was like, to go online in 1992, being 17 years old, to become a journalist in the 1990s, and try to keep doing your job in 2000s.

Did you have any reservations about mixing those two perspectives or styles?

We have a very good editor! Also, because it’s about two authors, you couldn’t find “I” or “We” in the book, for clarity, it’s always “Andrei” and “Irina.”

As mentioned above, you co-wrote this book with Irina Borogan. And you have co-written other works with her as well. Are there particular challenges and benefits to writing with someone?

Well, the obvious fear to end up thinking alike. But Irina has a very strong personality, so I hope we are pretty safe.

How is it different than writing independently?

It’s difficult to say, as I always run what I write past Irina.

If we could broaden the conversation slightly, how do you think your writing has changed over time?

It was very analytical in the beginning, and I was even praised for it, as it sounded smart. But later on I understood that journalism and writing are not about schemes; they’re about people. You could explain your point well only if you have people talking, and telling stories.

What has motivated those changes?

What role does reading play in your writing? Is your writing style influenced by what you read?

Yes, absolutely. In our country we don’t have tradition of journalistic non-fiction, so I started reading Western journalists’ books quite early, in 2001-2002. Back then I just started writing about the secret services, and I needed some example. I couldn’t find it at home, but by chance, I bought a book about the British counterintelligence agency MI5 written by Nick Fielding, we became friends, and Nick has been my friend ever since!

And if so, how do you distill your voice from those authors that inspire and influence you?

Well, I write about a very specific topic, the secret services, and there are very distinct traditions of writing about these things in the world (you cannot confuse a British book with an American, for example). There are different rules for journalists; for example, only in the U.S. do leaks play such a crucial role in politics. The legislation is also different, like the infamous Official Secrets Act in the U.K. or U.S. laws on whistleblowers. So as much as I would like to I cannot imitate an American or a British voice in telling my stories.

Finally, I would like to ask for book recommendations. Could you recommend three books that have been important to you that you think everyone should read?

The Dead Hand by David Hoffman. Maybe the best book about the Cold War, and surely the best about the Soviet military industrial complex mentality.

The Shadow Factory: The Ultra-Secret NSA from 9/11 to the Eavesdropping of America by James Bamford. Great example how to write about surveillance.