Report on the 2015 Study Season

The University of Chicago Excavations at Isthmia, 2015 Jean Perras supervised activities at the site and worked with authors of Isthmia studies and final preparation of manuscripts on the arms and armor, Rachi Settlement, Classical and Roman Pottery, and coins.

Final preparation of the manuscript ‘The Bridge of the Untiring Sea’: The Corinthian Isthmus from Prehistory to Late Antiquity. eds. Elizabeth R Gebhard and Timothy E. Gregory, Hesperia  Suppl. 48 occupied Jean Perras, the director  and  colleagues throughout the year.

In 1959, following a chance discovery of a 4th c. B.C. statue dedicated to Demeter and a well containing a contemporary krater also inscribed “to Demeter”, Oscar Broneer opened trenches in the surrounding area which lies 200-300 m. west of the Temple of Poseidon. Two Greek cisterns and a large Roman latrine emerged from the excavation, and he concluded that “The three excavated areas can hardly have been directly connected with any of the cult places in the Sacred Glen (Isthmia II, pp. 113-116). The pottery and figurines remained largely unstudied.

Current analysis of the material from the old excavations by Martha Risser and Arne Thomsen has revealed that both figurines and the ceramics are consistent with offerings and rites of a cult in late Classical – early Hellenistic periods, contemporary with the two dedications to Demeter that were found in the vicinity.  A deep ravine running along the west side of the area may well be the hiera nape that is recorded in IG IV.203 as the place of temples and statues dedicated over 400 years later to Demeter and Kore, Artemis and Dionysos by the great Isthmian benefactor, P. Licinius Priscus Iouventianus. Further study of the area is needed to map the ravine (see photograph below) and survey a wider section of the east bank towards the Poseidon sanctuary.

Martha Risser continues her study of the pottery, supervising drawings and checking records. Concerning the Sacred Glen pottery, she notes that “the range of shapes is very limited; early all of the vessels are skyphoi, fine bowls, oinochoai, lekanai, mortaria, amphorai, casseroles, and cooking pots. Pithoi and Perirrhanteria are present as well.” The material reminds her of the 4th century lots from the Demeter Sanctuary at Corinth. It also looks like later versions of the assemblages in the Archaic Reservoir  (Large Circular Pit) and the dining cave above the theater at the Poseidon sanctuary.

Jennifer Palinkas is copy-editing Hayes’ manuscript. She spent July at Isthmia checking the catalogue and drawings. Completion of the manuscript is expected the end of 2015.

Jonathan Stevens worked on Fritz Hemans files, revised and edited two chapters of Hemans’ ms. on the Archaic Temple. He edited illustrations for the Bridge of the Untiring Sea volume and plans for the volume on the Rachi Settlemengt.

Carrying on the work of Liane Houghtalin, Mike Ierardi checked the entire coin collection that is now housed in the Isthmia Museum and updated the coin cards. He also consulted with Virginia Anderson-Stojanovic and Liane Houghtalin about coins from the Rachi Settlement. 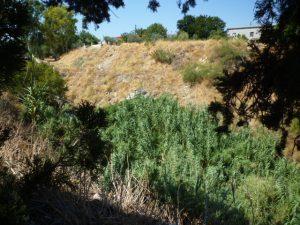