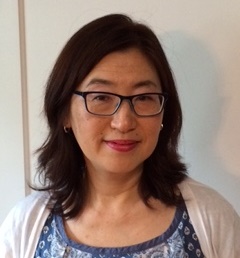 Yasuko Tsuchikane received a Ph.D. in art history from Columbia University and teaches at Cooper Union in New York. Her research interests focus on late 19th and 20th century Japanese art concerning the dynamic interrelation among differentiated categories within areas such as countries of origin, media, and social sectors for art production, patronage, and appreciation. Her work on calligraphy is the most recent example of her investigation dealing with this issue. The topics of her publications include intellectual discourse on ceramics and the patronage of Nihonga artists in Kyoto Buddhist temples.

Beyond Labels: Decoding Asian Letterings in Postwar Japanese Art
This presentation will pose the question whether a complete synthesis of writing and picturing was possible in early postwar Japan. It will problematize the “mainstream” avant-garde discourse on the interaction between non-lexicon letters and abstract pictures as a view privileging the principles of the West and picturing. In search of a counterexample from the East Asian civilization of lettering, the presentation will heuristically examine the impact of aesthetics and philosophy uniquely developed within Japan’s premodern writing system on the country’s postwar visual culture outside of what has been labeled “calligraphy.” Identifying Asian roots within Japan’s calligraphy in its bifurcated writing system consisting of Chinese characters and Japanese kana syllabaries, I will argue that artists’ conscious selection from these two lettering modes to be translated into pictorial and design media was a culturally and socio-politically sensitive issue, expressing their changing values after the turbulent decades of the Sino-Japanese wars.