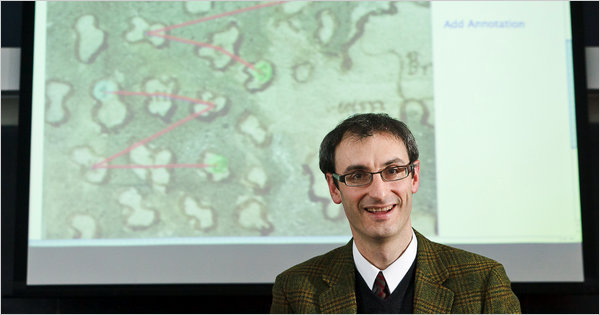 The article “Digital Keys for Unlocking the Humanities’ Riches” recently published in the New York Times discusses the growing importance of data and technology to research in the humanities.

The next big idea in language, history and the arts? Data.

The focus on digital humanities is timely; this weekend the Visual Resources Center and the Division of the Humanities are co-sponsoring, along with the Newberry Library and Northwestern University, the very first THATCamp Chicago. THATCamp Chicago is a user-generated “unconference” where humanists and technologists work together for the common good. For more information, click here.

Over the past few years, the Center for History and New Media has been helping to organize a series of “unconferences” called THATCamp (“The Humanities and Technology Camp.”)  These unconferences are based on the idea that some of the most productive work of conferences happens in the hallways and in more informal gatherings.  With this in mind THATCamp is based on conversations and not the delivery of papers.  They are “lightweight” and are paid for, in part, by attendee donations.

The structure of the conference is decided when everyone arrives, and applications do not include a paper proposal.  Instead, applicants explain why they want to attend and explain current projects on which they might like to collaborate.  In addition, some THATCamps include a “Bootcamp,” which is a series of workshops that teach concrete tools or skills.  These workshops are designed for beginners, and the hope is that attendees leave with something new to tinker with. THATCamp Chicago is planning a Bootcamp that may include workshops on Processing, Omeka, Geographic Information Systems, and Design Tools for the Digital Humanities.

Find out more at http://thatcampchicago.org.