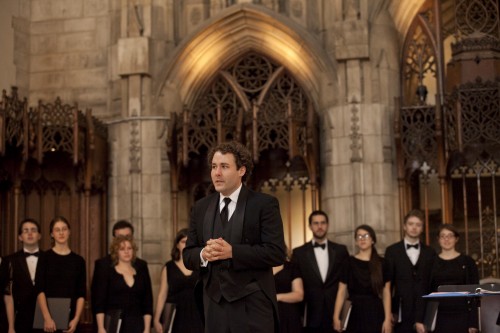 This coming Saturday April 20th, the Rockefeller Chapel Choir and the UChicago Motet Choirs join together in the last of the season’s Quire & Place concerts.  The concert will feature songs of mourning, including Mozart’s Requiem (his haunting, final work), in honor of those who have lost their lives to violence on our streets and in our public schools.  Please tell me more about the repertoire on this concert?  How does this music in particular serve to honor the victims of violence in our society?
Mozart’s Requiem is tragic on two levels. First, it is a sincere expression of mourning, told through the texts of the Catholic rite. Second, it is well known that Mozart struggled, and, indeed, failed to finish the work. It had to be completed upon his death. This must have been particularly painful for Mozart, as his wife was depending on this commission to secure funds after Mozart passed away. The commission was fulfilled, in the end.

The first half of the program is titled “Fragments of Mourning.” Mozart’s Requiem is a fragment, that is, an uncompleted sketch, and it will be performed in a manner that accentuates this fact. The first half takes movements and fragments from more recent composers and puts them in a sort-of “missa eclectica.” These short unaccompanied works are all “fragments,” in a sense. Furthermore, each one of these movements reflects the theme of “mourning” in a different sense. That is, the mourning of specific persons, the mourning of tragic events, and so on. There are single movements from works, and a fragment of Henry Purcell that is completed by the modern Swedish composer Sven-David Sandström. In addition, very recent music of composer Ted Hearne speaks more directly to violence in schools such as those on the South side of Chicago. One movement by Hearne is a quote from an interview with David Simon, creator of the television series “The Wire.” This television series deals directly with the issues in public urban schools. Another movement by Hearne is a translation of a South African protest song, and the music is his own unique spin on this genre.

As the director of all three major choral ensembles, the University Chorus, Motet Choir, and Rockefeller Chapel Choir, how do you choose the repertoire for each ensemble?
I chose repertoire that I think is appropriate for the make-up of each group, of course, but I also take the “pedagogy” of programming very seriously, especially for students in the college. It would be a tragedy if an undergraduate student were never given the opportunity to sing a major work by J.S. Bach, or a motet by Victoria or Byrd. It would be an equal tragedy if a student never sang a piece that was written in the last ten years, and, in fact, we have given more than one world premiere of a piece of music every year since I have been here. There is also music from various folk traditions to be explored, music from non-Western cultures of all kinds, and also what I like to call “satellite” pieces: pieces that really have merit but have been eclipsed such as the Michael Haydn Requiem (which had an obvious musical influence on Mozart’s own) or the Gretchaninov Vespers (which was written six months before Rachmaninoff’s!)

Is there a particular great choral work that you have not had the opportunity to conduct that you dream of performing in the future?
That’s extremely difficult to answer. Most of the things I would really like to conduct but don’t quite have the means are things like Sven-David Sandström’s “High Mass,” Samuel Barber’s “Prayers of Kierkegaard” and things like this. On a smaller scale, I would like to explore things I love like the Eton Choirbook, which is highly specialized, so I do not get to program much from this era (very early British Renaissance).

As a proponent of both young and established new composers, you have been working with Swedish composer Sven-David Sandström to form the Choral Institute of Chicago.  Can you tell me a bit about this organization and its future goals?
In a sense, I have been achieving this goal piecemeal, raising money for commissions and the means to perform them. However, I have a larger project with Sven-David which is to have a workshop that attracts the very best student and early-career composers, regardless of experience in choral composition, and gives them the opportunity to write for the voice with the guidance of a master-mentor such as Sven-David and with a professional performance. In the longer-term, I would like this “summer” project to be extended into a three-concert season, where new choral works from this summer institute are programmed throughout the year, perhaps even in cities in addition to Chicago. In short, it is part of my main goal as an artist, which is to constantly be involved in the creation of art, whether composing, commissioning, conducting, or programming.

Tickets for Mozart’s Requiem on April 20.