About Face
The overall project consists in two parallel explorations of the ethics of face-to-face contact and the problems of face recognition, both of these to be completed simultaneously over one year. The project is a collaborative undertaking between The Chicago School of Media Theory (CSMT) and the PanAsian Solidarity Coalition (PASC).

Mirroring and Imitative Identification
This phase of the project will consist in a series of brief interviews conducted in various Chicago neighborhoods and “ethnic enclaves.” We will show each interviewee an image of a face and then ask them to [1] mirror the facial expression [2] identify the emotion it conveys, though not always in that order. 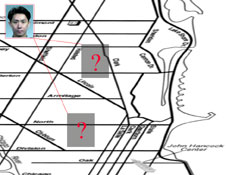 Certainly there are shades of affect as yet nameless, and perhaps they are elided when one seeks to identify them verbally. The project not only involves documenting what “anger” looks like for various subjects, but it also considers the potential factors—cultural, geographic, and otherwise—governing recognition. We will superimpose the images of mirroring subjects onto an interactive map of Chicago. When selected, each thumbnail will reference mirroring “instances” and “locations,” tracing arrays of recognition and non-recognition. A feedback-enabled interface will accompany all the permutations of this piece, thus inviting discussions about human recognition and its mediation through the cultural propensities attributed to certain groups.

Looking Awry at Biometrics
This project phase interrogates the logic of Facial Recognition Software by converting photographs into interactive images that cannot be “read” by the software. Following the tenets of biometrics, Facial Recognition Software divides the face into a grid, measures the distance between the eyes, for example, or the relative length of the nose, and then establishes the possible range of movement for the facial features within certain grid panels during given emotional states. For instance, the program might track the elevation of the eyebrows during a moment of surprise, delimiting their highest point and how fall they may fall before the expression fades.

Ostensibly, the use of general algorithms in the reading of facial expressions circumvents cultural factors. In such automated facial analysis, faces are territorialized—grids divide faces into sectors, prototypical expressions settle into ranges, and “recognition” distilled into algorithms.

We will use scripting in Flash to approximate functions in non-proprietary facial analysis algorithms, many of which are available in the public domain. Once the software establishes its grid and measurements, we will introduce slight amounts of error to each panel based on the expression-specific ranges of possible motion. This variation will be activated by the motion of the mouse over the panels, so that each expression will remain fleeting and transitional. In terms of everyday experience, this experience might approach the sensation of seeing from the corner of the eye. The aim is not to produce an image of a grotesque or almost cubist character, but a face unaccountably affecting and unsettling. These “unnameable” expressions reside on the periphery, outside the range of (e)motions granted by automated facial analysis.

For our final presentation, images of audience volunteers will be integrated into the works, which will be digitally projected onto a series of face casts. These casts will vary in scale (up to 300% of original) and degree of opacity.

When one names a facial expression, symbolic forms such as “joy” or “rage” threaten to efface its specificity. The work of the symbolic regime in this case reveals the etymological dark side of the phrase “facial expression.” The Facial Recognition Software likewise replaces the face itself with an algebraic entity. This software indeed establishes identity, in a terribly mathematical sense: FACE = NAME or EXPESSION = FEELING. One speaks of reading faces rather than seeing them, and the human face, the most iconic site of them all, has become an occasion for various varieties of non-sight. When one imitates a facial expression before attempting to name it, the image itself and the muscle-memories involved in reproducing it may generate an understanding and an identification apart from what one gains by simply naming the feeling. Likewise, the flicker of an impossible expression may provide an uncanny flash of recognition. By envisaging the problems of recognition and mirroring as puzzles of visuality, one may start to re-encounter the face through the technologies of culture and surveillance (essentially, technologies of strategic blindness).

Involving college and graduate students from over a dozen departments, this project will forge a space for mutually enlivening dialogue between the arts and community or cultural groups concerned with culturally coded perceptions of race (such as supposed inscrutability of the Asian face) or with the ethics of surveillance. Likewise, such a project will encourage engagement within the university community between the arts and those areas of theory which concern mediation, race, and the gaze.