The modern word “propaganda” is derived from the Latin verb propagare, meaning “to propagate, to disseminate, to spread” (Oxford English Dictionary). More specifically, the form of the English word directly reflects the Latin gerundive, propagandus, which functions as a verbal adjective (a verb form that rather self-explanatorily operates adjectivally—here roughly conveying the sense of “ought to be spread”). The exact spelling propaganda (the feminine ablative form of the gerundive) is likely due to the popularization of the word’s modern use from the term sacra congregatio de propaganda fide (the Sacred College for Propagating the Fate), a body formed by Pope Gregory XV in 1622 to train priests bound for evangelical missions in non-Catholic nations [http://archives1.archives.nd.edu/propfide.htm].

The sense of the word propaganda conveyed by this proselytizing body’s mission correlates well with its contemporary connotations. The OED defines propaganda as “any association, systematic scheme, or concerted movement for the propagation of a particular doctrine or practice”. Moreover, it adds that the propagation of information is carried out “by an interested party, esp. in a tendentious way in order to encourage or instill a particular attitude or response” (OED). The term propaganda thus currently carries a negative meaning, evoking the idea of an agent deliberately manipulating the way a recipient absorbs and interprets information.

In this sense, propaganda has been utilized throughout recorded human history in diverse media, both written and visual. The first Roman Emperor, Augustus, famously had a list of his accomplishments as he saw them, the Res Gestae, inscribed and displayed across the Mediterranean world. The inscription includes first person accounts of Augustus’ political honors, gifts of money and games that he made to the “people of Rome”, and military accomplishments. Set up on a monumental scale on bronze tablets in Rome and in other public edifices elsewhere, the Res Gestae was intended to idealize and legitimate the imperial monarchy and familial dynasty that Augustus had established.

A classic example of the use of visual art as propaganda is the work of 19th century painter Jacques-Louis David. Closely aligned with Napoleon Bonaparte, David was commissioned to create large-scale canvases commemorating his patron’s military and political successes. Iconic works like “Napoleon Crossing the Saint Bernard” speak to the idealization and license with the truth that were employed to convey the French Emperor’s intended image of himself. Though Napolean had actually crossed the Alps on a mule, David’s painting portrays Napoleon charging across on a raging steed, the names of previous conquerors etched on the ground below to convey the sense that Bonaparte had surpassed them all. 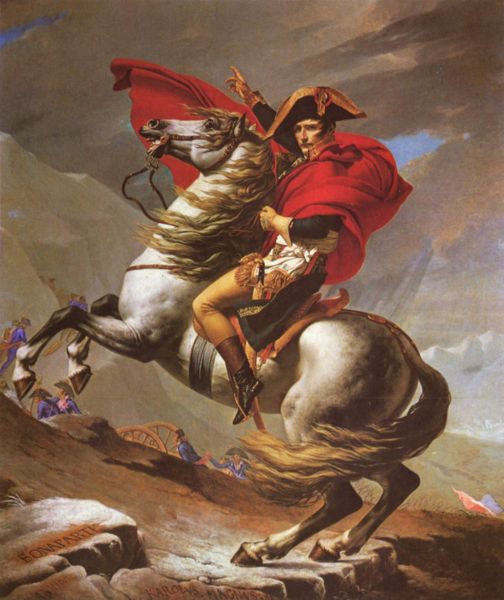 The derogatory use of the word “propaganda” itself only came about in the early twentieth century, with the rise of states and regimes which could widely disseminate political ideologies and messages in an unprecedented, centralized manner through mass media and the arts. The Soviet Union, for instance, proclaimed Socialist Realism as the only acceptable type of art in 1932 with Stalin’s proclamation “On the Reconstruction of Literary and Art Organizations”. Socialist realism glorifies the proletariat class struggle, particularly in industrial contexts, and was embraced as a rejection of pre-Revolutionary decadent Bourgeois art. 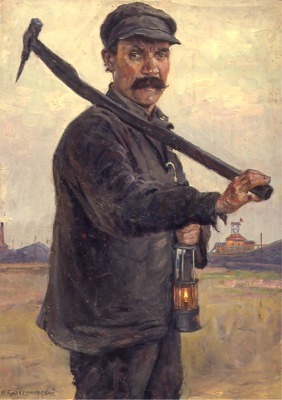 Literary production was also controlled and determined by the Soviet government through the Union of Soviet Writers.

During both World Wars and the Cold War, every involved state directly controlled the production and content of posters, radio, television, films, and newspapers to influence their own citizens, their enemies, and neutral parties. During the Second World War, for example, the U.S. employed the Office of War Information while the British made use of the Political Warfare Executive to guide such activities. Nazi Germany made use of the Ministry for Public Enlightenment and Propaganda (“Propagandaministerium”), a highly centralized executive that oversaw the dissemination of all journalistic, artistic, literary, film, and radio information under the direction of Joseph Goebbels. 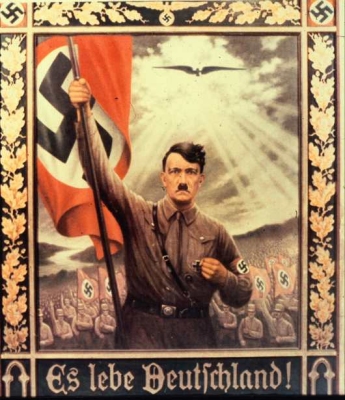 Propaganda employed in this manner in the twentieth century had its theoretical underpinnings in sociological and psychological work dating from the late 1800s. Hitler’s Mein Kampf, his propagandist text produced while imprisoned in the twenties, was largely influenced by techniques first proposed by the Frenchman Gustave Le Bon in his 1895 work The Crowd: A Study of the Popular Mind. Le Bon was at the forefront of the new field of group psychology, positing new theories about the role of the unconscious in social action. Journalist Walter Lippman also wrote notably on the subject in Public Opinion, having been hired along with psychologist Edward Bernays to work on the Creel Commission during World War I, which drummed up anti-German hysteria in the lead up to U.S. entry into the war. Lippman and Bernays’ campaign was hugely effective and the latter would come to coin the terms “group mind” and “engineering consent”. A primarily political lens continues to be a commonly employed approach to “propaganda” today, even with the demise of totalitarian regimes and the end of the Cold War. In their controversial 1988 book Manufacturing Consent: the Political Economy of the Mass Media, Edward Herman and Noam Chomsky put forward the “propaganda model” of understanding the content of mass media. They theorize that each medium for the dissemination of news is influenced by various filters which unavoidably result in skewed and biased information. These filters reflect contemporary economic structures: corporate ownership of media outlets (NBC as extension of General Electric and ABC of Disney), for instance, results in the selective use of media content for serving particular private financial interests.

Theorist Sheryl Tuttle Ross maintains a fundamental “political nature of propaganda”, but seeks a more precise definition by examining more closely the role of the “sender-receiver-message” dynamic. While some like Speier contend that the “sender” of propaganda must be a government or otherwise narrowly defined political agent, Ross expands the criteria to any institution, cause, or even “hired gun” which acts on “partisanship and preoccupation with some sort of justice or social order” with a tacit intent to persuade (“Understanding Propaganda: The Epistemic Merit Model and Its Application to Art” in Journal of Aesthetic Education Vol. 36, No. 1 2002, 19). Moreover, Ross specifies that the “receiver” of propaganda is always a “socially significant group”, that is to say an audience group that is purposefully narrowed according to a common factor (something that could be as broad as sex or race or much narrower) and then targeted.

Finally, it is in the “message” component that Ross situates the origin of much of the qualitative significance of propaganda. She notes that the word’s pejorative sense is due to the polluted nature of the information content being conveyed. Yet traditional explanations of why the message is thought to be so tainted—that propaganda plays with our emotions (rather than our reason, since the two, according to Plato, are directly opposed) or even consists of outright lies—are inadequate for Ross. Instead, she proposes a more accurate description of propaganda as being “epistemically defective or lacking epistemic merit where this criterion not only applies propositions and arguments but also to conceptual schemas (ways of carving up the world) as well as moral precepts” (23). This characterization seeks to move beyond judging the absolute truth value of a propagandist statement (since often those propagandizing believe fully in the validity of their messages). Advertising slogans might be technically true, she points out, but they are employed in misleading ways that take advantage of consumers’ conceptual frameworks for thinking about the world. For instance, Bayer aspirin commercials tout that “No aspirin has been proven more effective”—certainly true but it ignores the fact that all brands of aspirin are in fact the same, every tablet containing the same active ingredients. In other words, propaganda is not necessarily based simply on emotional response or lies, but on a message that is at best “indifferent to truth”: that is, one that uses context-dependent ambiguities to compel an audience to believe as indisputable conclusions which do not present a complete set of relevant facts and circumstances.

Ross, Sheryl Tuttle. “Understanding Propaganda: The Epistemic Merit Model and Its Application to Art,” Journal of Aesthetic Education. Vol. 36, No. 1 2002, 16-30.