The Oxford English Dictionary defines montage as “the process or technique of selecting, editing, and piecing together separate sections of films to form a continuous whole; a sequence or picture resulting from such a process” [1]. Another definition it gives for montage is “the act or process of producing a composite picture by combining several different pictures or pictorial elements so that they blend with or into one another; a picture so produced” [1].

It is helpful to first understand montage within a historical framework: I will first detail the early Soviet films, where montage began. It is of vital importance to keep in mind that this revolutionary cinema was just that: occurring during the height of the Russian Revolution, thus many of the films had a specific ideology that they were trying to use the medium to convey. With the purpose to incite, came the one of the most powerful tools in cinema: montage. This tool is highly poetic because it can be used to convey in the cinema what is the parallel to the literary metaphor. For example, just as the masses are being shot down in the movie, a Soviet director might quickly cut to a shot of a bull being slaughtered (this example is from Eisenstein’s Strike), thus distributing the message that the masses were being slaughtered like animals. 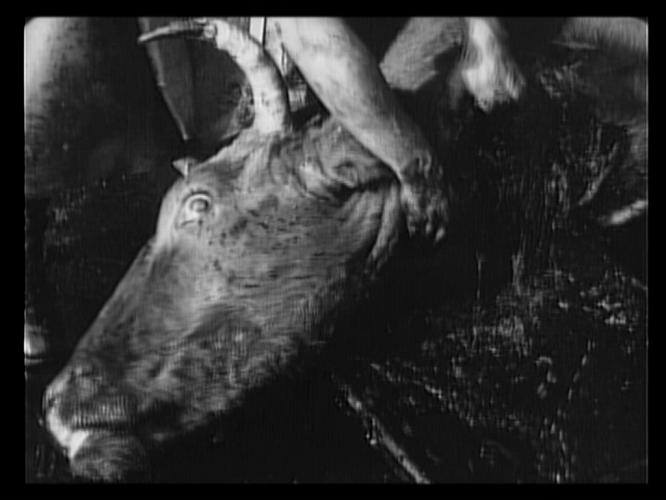 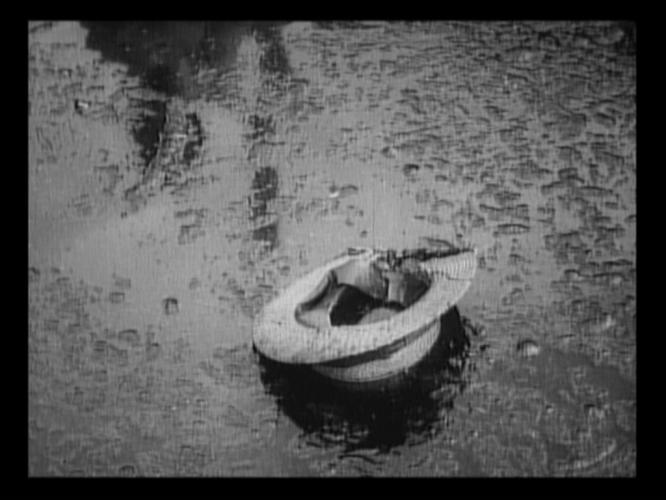 Furthermore, montage could be used to establish rhythm in a film, with the change in cuts giving excitement through the dynamic editing. Essential to the aims of Soviet cinema was the power to incite; something that stressed disjunction and fragmentation. Thus, Soviet cinema was very much against a “smooth” film, rather it would be purposely disjointed at times to arouse the audience. When sound cinema finally came to Russia, the directors purposely mismatched the sound with the image to create an even further disruption. Soviet cinema insisted on shaping the cinematic medium to meet the message it was intent on conveying. Thus, while it may come across to American viewers as heavy-handed propaganda, Soviet cinema attacks the notion of a smooth cinema that makes the audience passive; and as a result, Soviet cinema brought many new devices to the still new cinematic language.

Not all montage has to be like the Soviet style, however. Montage can be used as a device for establishing spatial and temporal relationships within a movie. In fact, most action and suspense movies rely on the power of montage to create excitement. A famous director who uses montage to create suspense is Alfred Hitchcock. In his movie, Psycho, when the protagonist is murdered, Hitchcock cuts between the killer’s knife and the woman in the shower, so the audience realizes the woman is being murdered, without the knife actually having penetrate the woman. 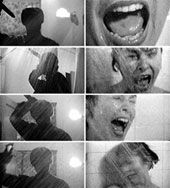 The concept of montage has its parallels in other art mediums; an example of this is collage. The Oxford English Dictionary defines collage as “an abstract work of art in which photographs, pieces of paper, newspaper cuttings, string, etc., are placed in juxtaposition and glued to the pictorial surface” [2]. While collage is in fact a technique for making art, much of its power resides in its theoretical implications, such as the importance of juxtaposition to the collage technique: things are combined that normally would not be. This technique is often used to take elements of and create art of them, Furthermore, this juxtaposition of multiple seemingly different things challenges the unity of conventional art forms and thus challenges the grand narrative of art.

Christine Poggi remarks on the collage: “The intrusion of everyday, nonartistic materials into the domain of high art challenged some of the most fundamental assumptions about painting inherited from both the classical and the more recent avant-garde traditions. The invention of collage put into question prevailing notions of what and how works of art signify, what materials artists may use, and what constitutes unity in a work of art” [3].

When thinking about the collage, it can be helpful to learn about artists who use this technique. One specific artist that is renowned for his experimentation with the collage is Pablo Picasso. Picasso viewed art as a re-presentation of nature rather than an imitation. Thus Picasso would use materials from popular culture and give them new meaning, as in his guitar collage. 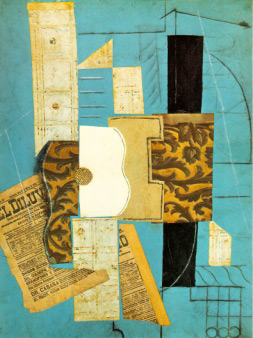 Poggi remarks on this: “Rather than describe these materials as ‘bits of reality,’ as has sometimes been done, one might more accurately describe them as already circulating cultural signs, confiscated by Picasso in order to be redeployed in the world of high art. Within their new context, the prior meanings of these elements is partly effaced and new meanings are superimposed” [4]. Thus mass culture becomes the world from which Picasso gets his material (literally), and his brilliance lies in his successful re-combination of mass culture to bring interesting connections between seemingly different artifacts of modernity. Poggi adds, “for Picasso, the making of collages and constructions was never a process that implied creation ex nihilo, but the recombination of the separable, semantic elements of preexisting cultural codes… That these elements appear as the remnants of a prior discourse, quoted out of context, allows for the partial depletion of their everyday meanings or uses, and opens them to a dialectical process of recognition and critical reinterpretation” [5].

Interestingly, when thinking of such things as bluescreens and digital image manipulation, it is evident that collage has taken on a further meaning in the temporal visual mediums. The concept of collage can now be used as a means of manipulation of images without the viewer realizing it.

Also important to the collage is the pun; Francis Frascina explains: “From the earliest examples of collage, the role of humor and irony, notably through the uses of visual and verbal puns, has been an important element. In both the realm of “puns” (historical relations between signs from different periods) and the realm of etymology (historical relations between signs from different periods), two similar but distinct signifiers are brought together and the “surface” relationship between them invested with meaning through the inventiveness and rhetorical skill of the practitioner. Such possibilities… can act to destabilize notions of “fixed” meanings or dominant distinctions between “real” and “false” connections” [6].

The concept of the double meaning is essential for the collage; as the Group Mu Manifesto states: “Each cited element breaks the continuity or the linearity of the discourse and leads necessarily to a double reading: that of the fragment perceived in relation to its text of origin; that of the same fragment as incorporated into a new whole, a different totality. The trick of collage consists also of never entirely suppressing the alterity of these elements reunited in a temporary composition” [7].

Collage is not the only parallel technique to montage, however. The use of collage and montage can be seen in poetry, such as in the writing of T.S. Eliot, where sets of seemingly arbitrary words are strung together to create new meanings. Furthermore, the collage/montage device can even be seen in the music of today, where producers create “mash-ups” of songs to create a new unique hybrid song. Thus, while collage and montage are usually associated with visual art, they actually apply to a wide array of mediums.