It could be surmised that the concept of architecture has been around since the first building was erected and its practice one of man’s most universal and elementary activities.  The prefix, archi-, in fact, signifies earlier, or primitive.  The actual term architecture (or its Latin counterpart) first appeared in Vitruvius’ De architectura in the first century BCE.  The Oxford English Dictionary defines architecture as “1) The art or science of building or constructing edifices of any kind for human use” or more artistically speaking, “4) The special method of ‘style’ in accordance with which the details of the structure and ornamentation of a building are arranged.”  When Vitruvius first posited the concept of architecture in writing, he did so by outlining the three essential elements of architecture which are still known and used today: firmitas (structural soundness), utilitas (function), and venustas (beauty).  Clearly, there is a general distinction made between the use value and the aesthetic values of architecture.

Even the OED admits “architecture is sometimes regarded solely as a fine art.”  Nevertheless, it has a much different aesthetic value than the painting or photograph.  The optical reception of a building takes place in a more incidental fashion as opposed to having a concentrated, aware viewer.  Still, architecture has undeniably been a form of art and architects and architectural theorists through the ages have fumbled over the true meaning of the architectural aesthetic.

Florentine Renaissance humanist and architect Leon Battista Alberti introduced the idea that architecture is mediated by the laws of nature in his book De re aedificatoria (1452).  By reflecting the beauty of nature in his buildings, Battista hoped to aesthetically please his viewer by drawing on embedded standards of the mind.  [See taste.] Here he posits that, “when you make judgments on beauty, you do not follow mere fancy, but the workings of a reasoning faculty that is inborn in the mind.”  The most influential, he believed, were the mathematical terms number, proportion and distribution.  He used the numerical proportions found in music theory to prove his case by demonstrating their beauty when used as rations in architecture.  This reliance was emphasized through the extensive use of consonance (2:3, a fifth) in plans and elevations.

A second application to arise during the Renaissance was the connection between architecture and the body, the idea that architecture is mediated by the body and vice versa.  Some architects, such as Sienese Francesco di Giorgio, posited that the primary source of architectural proportions was the body.  Di Giorgio used man’s features for not only the orders, but the elevations and plans of buildings.  This concept of mediation was emphasized by Leonardo da Vinci’s drawing of a man’s body creating a square and a circle in the Vitruvian passage. 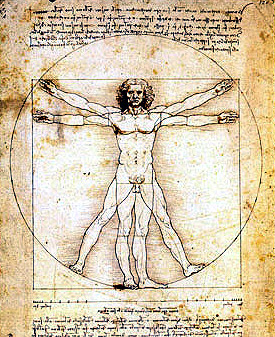 In a letter discussing architectural principles, Michelangelo reinforced the idea of bodily proportions.  He called architects “figural artists” because of the way that the symmetry and apertures of buildings imitate the form and orifices of the human body.  Again, the aesthetics of a building associate and thereby absorb its viewer.

As various art forms develop and perish through the years, architecture has survived as a prominent display of beauty – and this is resultant of its use value.  According to Benjamin, “the human need for shelter is lasting.  Architecture has never been idle.”  Man’s immutable necessity for shelter brings an interminable need for architecture.  Nevertheless, there is more to a building’s use value than its function alone.  Architecture is used most prominently to convey a message or meaning to its viewer.

The mediation of religion through buildings has been resolute throughout history, but may have been emphasized most during the Renaissance.  By using interpretations of religion to convey the piety and morality of society, architects ran into a multitude of restrictions.  Saint Carlo Borromeo’s manual, Instructiones fabricae et supelectilis eccleasiasticae, demanded that bishops involved in the architectural process for churches must support the liturgy and remain expressive of Christian dogma in their work.  The importance for these structures and society’s dependence upon their meaning brought much concern to those designing churches and cathedrals at the time, such as Alberti.  Religious rules came into play such as when an architect was forced to take into account the deity or saint to which a religious building might be dedicated.  One architect, Philibert Delorme, went so far as to use the proportions succinct with the dimensions of buildings treated in the Bible in order to resurrect this meaning in his work.

In all, a building is used to convey tradition and culture, it must portray the way in which society lives at that time.  In this way, architecture is much similar to graffiti.  For example, an individual might deface a wall with a description of his life, his problems and what matters to him, and furthermore the community at that time.  While passersby encounter both graffiti and architecture alike (and regardless of their will), architecture must follow many more guidelines and requirements as opposed to unauthorized spray painting.  The guidelines by which an architect must follow the whim of society were emphasized by Michelangelo when he posited, “Though variation and new things ought to please everyone, one should not do what is contrary to the precepts of art and against what reason shows us, when one sees that even the ancients varied [their designs]; but never departed from certain universal and necessary rules.”  Sigfried Gideon believes that architecture must speak in terms of the time period it is in.  He explains that the ethos of a people can be interpreted and conveyed through a structure in a way that future generations may recognize a building and associate it with a period of the past.  This type of architecture must interpret the right of the community and the individual as well as the places in which they dwell.  Thus, as our sense of community changes and our relationship between one another evolves, the way that these acts are reflected in architecture will also change with the times.

An important task in interpreting communal variations is to understand these changes as well as to understand the space in which these changes are made.  This procedure also works in reverse, whereas an understanding of one’s situation will assist in the evolution of shelter.  According to Marshall McLuhan in Understanding Media, the “translation into new dwelling spaces occurs only when men have learned to practice specialization of their senses, and fragmentation of their work skills.”  This provides an explanation of what prompts an individual to move from a round to a square house.  As in McLuhan’s example, “the square room or house speaks the language of the sedentary specialist, while the round hut or igloo, like the comical wigwam, tells of the integral nomadic ways of food gathering communities.”  Thus we see  how building and structure work as a medium for a community’s specific persona.

A final relevant use of architecture most common in the modern world is the mediation of a new mode of distracted perception.  Benjamin has posited that the mastery of certain tasks while in the state of distraction proves their completion is a matter of habit.  The use of art and architecture mobilizes the individual, thus motivating him or her to “tackle the most difficult and the most important [tasks]” despite temptation to avoid them.  Similarly, Jeremy Gilbert – Rolfe has suggested the role architecture plays in diverting the everyday commuter from his monotonous routine.  He actually reduces all architecture to the sole use of distracted perception by stating, “[architecture today] is built for people who live on the highway, the mobile, car-bound subject.”  In this sense, it is the aesthetic value of a building that reinforces its use value, drawing its viewer into this secondary realm of consciousness.

Nevertheless, as possibilities for architecture soar, modernism has taken its course as well by switching focus to function over aesthetic value.  Modern day architecture has evolved to the point where, in some cases, artistic expression is completely lost.  Ludwig Wittgenstein wrote in his Tractatus Logico-Philosophicus that, “If a sign is useless, it is meaningless.”  Under the influence of beliefs such as this, corporations today have begun requesting building with less and less architectural design.  By simplifying design, production costs are lowered, saving money and increasing profits.  Aesthetic appeal is slowly becoming less important.  The result of this process is an overwhelming abundance of graph-like layouts and cookie cutter buildings.  Functionalism has prevailed and “anonymous” architecture reached its pinnacle.

Fortunately for the tasteful spectator, architecture has turned around drastically in recent years.  The importance of aesthetic value has increased tremendously as buildings become more sculptural and far more interpretive and suggestive.  Esteemed designer architect Frank O. Gehry is well known for his artistic and original buildings.  Often noted as “one of the key buildings of the century,” Gehry’s Guggenheim Museum in Bilboa, Spain proves that there is a future for artistic expression in architecture.