WASHINGTON — The emergence of a single-page letter supposedly written by a senior North Korean official 13 years ago has become the strongest evidence yet suggesting that Pakistan’s top military officials were involved in a secret sale of equipment to North Korea that enabled it, years later, to begin enriching uranium. 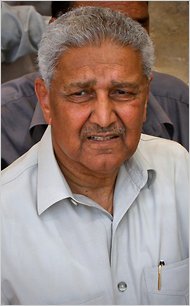 The letter is said to have been written to Abdul Qadeer Khan, the Pakistani who built the world’s largest black market in nuclear weapons technology, by Jon Byong Ho, a North Korean whom American intelligence has long put at the center of the North’s trade in missile and nuclear technologies. It reports that the chief of the Pakistani Army at the time, Gen. Jehangir Karamat, had been paid $3 million and asked that “the agreed documents, components, etc.” be placed on a North Korean plane that was returning to Pyongyang, the North’s capital, after delivering missile parts to Pakistan.