The Virtual Tourist in Ancient Rome symposium brings together scholars from the United States and Europe to address new directions in research on Renaissance antiquarianism and visual culture, including those making use of digital technology.

This is a very simple site built on the NigaRila WordPress theme. It has a clean and simple design that relies in large part for its positive effect on the striking nature of the custom header image. A site like this with a solid color header is likely to be visually less effective. This was one of the first sites we created in WordPress for conferences. Today we would probably structure the site navigation a little differently (using a horizontal menu under the header image for example). However it’s still worth considering as a model as an example of how much can be done with very little effort. The whole site was put together in 20 minutes. 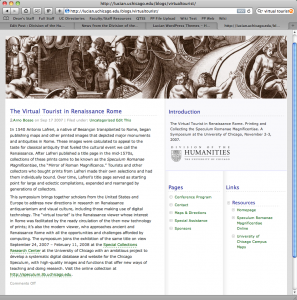